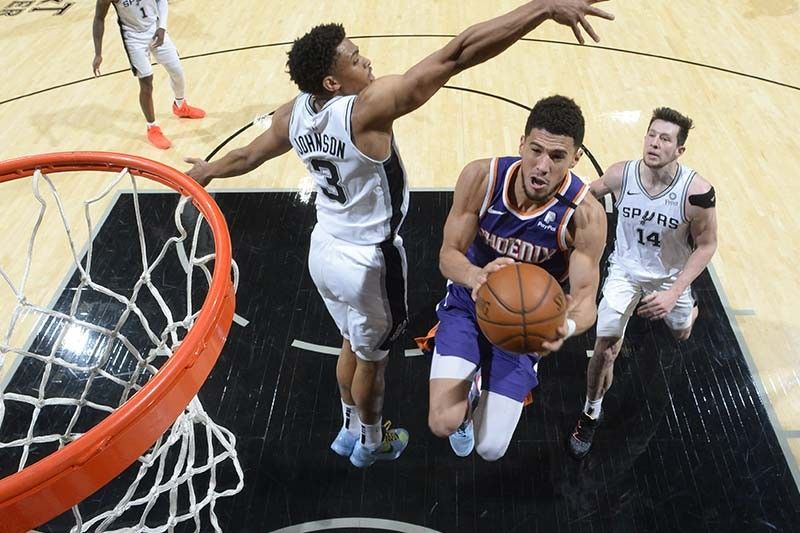 MANILA, Philippines — The Phoenix Suns stay in the hunt of the top-seed in the Western Conference following a 140-103 rout of the San Antonio Spurs in the penultimate day of regular season hostilities on Saturday (Sunday, Manila time).

The Suns reached the 50-win mark against the Spurs but will need to repeat against them tomorrow and hope for a loss for the Utah Jazz against the Sacramento Kings to clinch the No. 1 seed in the conference.

Devin Booker starred in the Suns' victory with 27 points to keep his team's hopes afloat.

Elsewhere, the Los Angeles Lakers won their fourth straight game to keep their hopes of climbing out of the play-in alive.

Their latest victory came against the Indiana Pacers, 122-115 in LeBron James' return from injury.

James flirted with the triple-double in his first game back with 24 points, eight rebounds, and seven assists.

Much like the Suns, the Lakers will need to win their own game against the New Orleans Pelicans, and hope for a loss by the Trail Blazers to the Denver Nuggets in order to get out of the play-in hole.

The Portland Trail Blazers hold the tie-break advantage and will head into the playoffs should both squads win their respective regular season enders Sunday (Monday, Manila time).

In the other games, the Brooklyn Nets had all of its three stars in their easy win over the also-ran Chicago Bulls, 105-91.

After struggling in the first salvo, the Nets leaned on production from the troika of Kevin Durant, Kyrie Irving, and James Harden to flip the script and lead by as much as 20 points late in the fourth quarter.

The Nets, however, have yet to clinch the second seed as the Milwaukee Bucks remain only one game behind.

Should the Bucks win their final game against the Chicago Bulls, and the Nets lose against the Cleveland Cavaliers, Milwaukee will clinch the second seed due to the tiebreaker.

The Bucks also won their matchup earlier today against the Miami Heat, 122-108.

The New York Knicks, and the Boston Celtics also tallied wins in the day over the Charlotte Hornets, and the Minnesota Timberwolves, respectively.