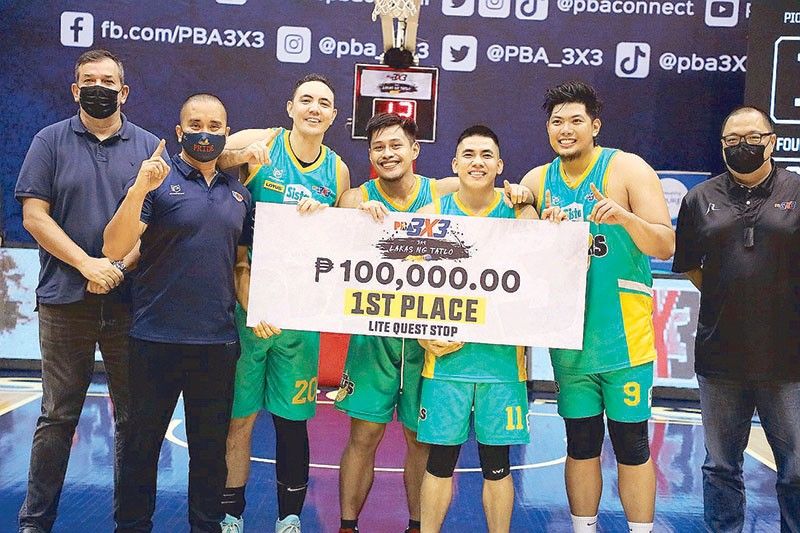 MANILA, Philippines — Sista completed its major turnaround from a winless team at the start of the PBA 3×3 to the best of the lot in yesterday’s Leg 3.

With a combo of hot outside shooting, pesky hustle plays and solid inside game, Kenneth Mocon, Leo de Vera, Prince Rivero and RJ Argamino sealed Sista’s rise to the top with a 20-13 romp against Pioneer Pro Tibay in a one-sided finale.

Mocon fired nine points, spiked by four two-balls, while Argamino added six markers as the Super Sealers copped the top leg honors after going 0-3 in the opening leg then improving to reach the quarterfinals in the second.

Sista – Rain or Shine’s team in the inaugural three-a-side competition – earned P100,000 for this feat. It joined TNT Tropang Giga and Meralco in the ranks of leg winners.

Terrafirma 3×3’s Matt Salem, Dhon Reverente, Jebb Bulawan and Terrence Tumalip posted their first podium finish with a 21-16 victory over the Purefoods TJ Titans in the battle for third. The Dyip received P30,000 for this finish, an amount they earmarked for the hospital expenses of injured captain Roider Cabrera.

After topping Pool B at 3-0, the Super Sealers eked out hard-earned victories over quarterfinal opponent Limitless, 17-16, and semifinal foe Purefoods, 19-15, to reach the finals for the first time.

Guest team Pioneer brought down two heavyweights in Leg 2 runner-up Platinum Karaoke in the Last-8, 21-19, and then unbeaten Terrafirma in the Final Four, 16-15, on a winning layup by De Chavez.

Sista unleashed a crucial 13-2 exchange sparked by Rivero’s inside incursions and Mocon’s long bombs to seize control against Pioneer at 20-8 going to the last 50 seconds.

“Lahat kami nag-step up, lahat nag-lead at nag-take control. We stayed composed throughout the game and we stayed together hanggang sa dulo,” said De Vera, who helped Sista win 50-50 balls and even hit big shots when needed most in this two-day leg.

De Vera topscored with eight when the Super Sealers took care of business against the Titans earlier in the semis.

Prior to that loss, Purefoods had won its previous four games and came off a massive 12-10 disposal of Leg 2 winner Meralco in the quarterfinals.

Like the Titans, the Dyip came off a sweep of pool action.