SWS: Only 16% of Filipino families say they aren’t poor

MANILA, Philippines — At least 84% of Filipino families are poor or borderline poor, while only 16% feel they are not, new survey results published Monday indicate.

Of these numbers, 8.2% of families were described as "newly poor," having described themselves as non-poor or borderline poor anywhere between 1-4 years ago.

SWS added that Filipinos identifying as poor or borderline poor increased across the board from numbers recorded the year before as families who identified as "not poor" declined in Balance Luzon, the Visayas, and Mindanao, while families that felt they were not food poor generally decreased in all areas.

READ: SWS: Hunger among Filipino families at highest since 2012

"In December 2019, the last time that SRP was implemented, there were 54% that felt Poor, 23% that felt Borderline Poor, and 23% that felt Not Poor. From December 2019 to November 2020, the borderline-poor grew by 13 points, consisting of 6-points that climbed up from below, and 7 points that fell down from above," SWS said in its report. 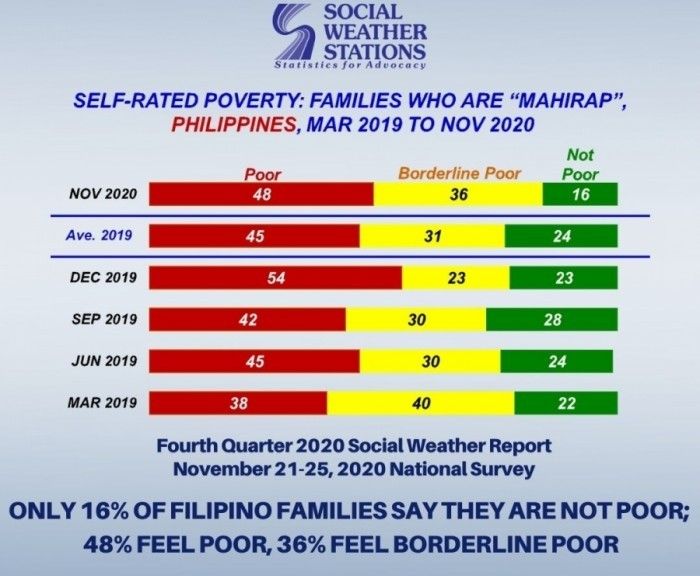 
"Metro Manila is the only area where families feeling Not Poor did not fall; poverty in Metro Manila worsened by 3 points, drawn entirely from a decline in the borderline poor," it also said.

A total of 1,500 working-age Filipinos participated nationwide in the institution’s research through face-to-face interviews, yielding sampling error margins of ±2.5% for national percentages, ±4% for Balance Luzon, and ±6% for Metro Manila, the Visayas, and Mindanao.

Separate data from the Philippine Statistics Authority found that 52.7% of small and medium-sized enterprises or SMEs, which make up the vast majority of registered businesses in the country, were forced to close up shop due to the coronavirus pandemic. The statistics office also recorded that 7.5 million Filipinos were left jobless and another 6.4 million underemployed.

RELATED: Palace 'delighted' that survey results 'only' at 45% joblessness

Earlier SWS surveys painted a picture of how the pandemic and government response affected the Philippines, with hunger and unemployment reaching record-highs, leading to what the polling nonprofit institution said was the "worst trend in survey history" in terms of quality of life.

As it stands, the government response to the global pandemic has seen stories of delayed action, double standards in law enforcement and incursions on dissent and free speech as some of the country’s most vulnerable strata continue to lag behind, dispirited sans government support.

Exactly 272 days since the community quarantines have been imposed, the national government is still struggling with curbing the spread of the pandemic, recording thousands of cases per day. According to the health department's latest case bulletin, coronavirus cases in the country have since eclipsed 450,000.