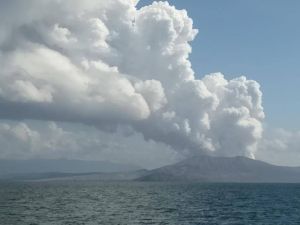 ANGRY VOLCANO Taal Volcano in Batangas erupts on Saturday, March 26, 2022. The Philippine Institute of Volcanology and Seismology ( raised Alert Level 3 and recommended the immediate evacuation of residents in the areas within the Taal Volcano Island. PHOTO BY MIKE ALQUINTO

(UPDATED) TAAL Volcano erupted briefly on Saturday, and the Philippine Institute of Volcanology and Seismology (Phivolcs) said there was no clear sign of another major burst as damaging as the one it had two years ago.

Phivolcs Chief Renato Solidum Jr. told a virtual press briefing that unlike in January 2020 “when the magma exploded strongly as it rose fast because the gas was not released,” the magma in Saturday's eruption was released gradually.

This means that gas did not accumulate beneath the surface that could have caused a bigger eruption, said Solidum.

Asked by The Manila Times on the possibility of a major eruption in the coming hours or days, Solidum in a text message said: “Right now the parameters do not indicate a major eruption like the January 2020 event.”

Solidum, an undersecretary of the Department of Science and Technology, said that there was a “need to closely monitor if deep magma beneath Taal [Volcano] would descend and how fast it will rise.”

On Saturday morning, Phivolcs raised the status of the volcano to Alert Level 3 after a series of short phreatomagmatic bursts or increased magma unrest and plumes or smoke as high as 1.5 kilometers were spotted from its main crater at 7:22 a.m. accompanied by volcanic earthquakes.

The volcano has since calmed down although Alert Level 3 remains.

Prior to Saturday's unrest, Taal had been under Alert Level 2 since July 23, 2021, was raised briefly to Alert Level 3 before it was downgraded, Solidum said.

Residents living near the volcano have been advised to wear face masks as protection against possible ashfall and sulfur dioxide emissions.

Solidum warned that the worst-case explosion of the volcano would be the generation of tall eruption columns and pyroclastic density currents that can affect areas in the mainland around Taal Lake.