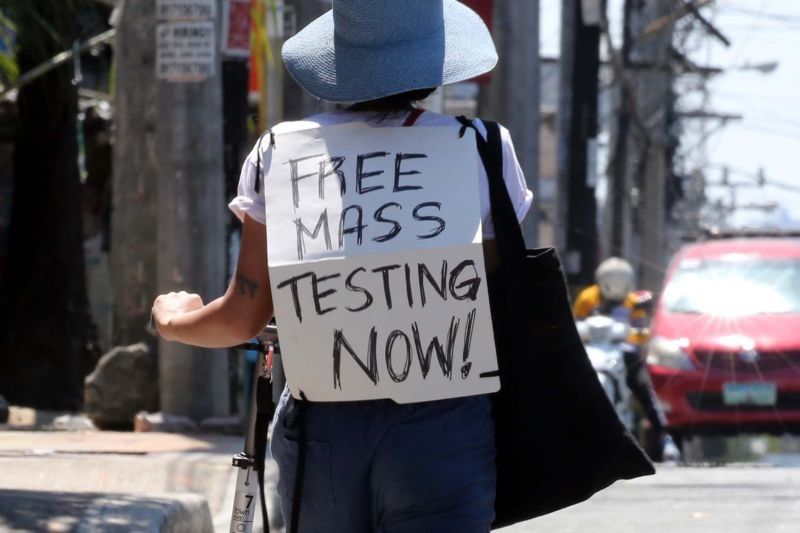 MANILA, Philippines — Much like the enforcement of enhanced community quarantine, it seems like even the government narratives surrounding the coronavirus are back to square one in the Philippines.

Despite calls for mass testing being over a year old, government officials still insist on tripping over semantics behind the word.

"All the experts in the Philippines and around the world say that mass testing the entire population of a country is not recommended,” Dizon, who also serves as the government's testing czar, said in mixed Filipino and English.

"Testing is not the only solution to the pandemic. We cannot test our way out of this pandemic. What we need is risk-based and targeted testing,” he added.

As far back as the onset of the pandemic over a year ago, administration officials also opposed the idea, saying the government did not have the resources to test every Filipino living in the country.

For the nth time, mass testing does not mean testing each of the country's 110 million inhabitants, and nobody has called for the national government to even do so.

When we say #MassTestingNowPH, we mean testing of patients with COVID 19 symptoms, frontline health workers, and communities with confirmed cases. #NOtoVIPTesting of politicians which only delay test results of patients who are dying. pic.twitter.com/tnARcsW7jy

Even the government's own Department of Health has defined “mass testing” as conducting tests on all those who have been exposed to a confirmed positive case of the virus. Mass testing is, instead, conditioned on widespead, timely and accessible free tests for all those who need it, including those exhibiting COVID-19 symptoms, both symptomatic and asymptomatic individuals who have been exposed to someone infected with the virus, health workers and other frontliners.

In a statement, Akbayan Party-list slammed Dizon's comments as "absurd," pointing out that "it is only in the Philippines that we have a testing czar who rejects mass testing."

The group added that the essence of mass testing is to increase the chances of detecting infected people, symptomatic and not, and making sure they are quarantined as soon as possible.

"A testing czar who rejects mass testing is no different from a doctor who abandons his patients: this is neglect of his sole duty! He would rather test the patience of the Filipino people, which is wearing thin by the day, due to their gross incompetence and zero empathy," Akbayan Spokesperson RJ Naguit said.

"This has been long established since the start of the pandemic, yet this administration has refused to learn. The WHO has urged countless times to conduct mass testing to curb the rise in cases, but our testing capacity remains below 40,000 tests per day. This is clearly not enough," Naguit, himself a doctor by profession, also said.

As of the Department of Health's latest tally Sunday afternoon, 812,760 coronavirus infections — 152,562 of whom are active — have now been recorded in the country after the department logged 9,737 more.

The Philippines has been on community quarantine for 387 days, good for the world's longest lockdown. Yet it seems that officials are still processing the definition of terms.

"Now is not the time for us to repeat the mistakes of our initial pandemic response, not when Filipinos continue to suffer from the pandemic. If this administration continues to fool us by forcing on us a twisted definition of mass testing and insisting they are unable to test more people, the fault lies squarely on their incompetence," Naguit said.

"We warn Mr. Dizon to stop testing the public's patience. History does not look kindly upon incompetent czars."

— with a report from Bella Perez-Rubio