The celebrity transformations continue in Your Face Sounds Familiar 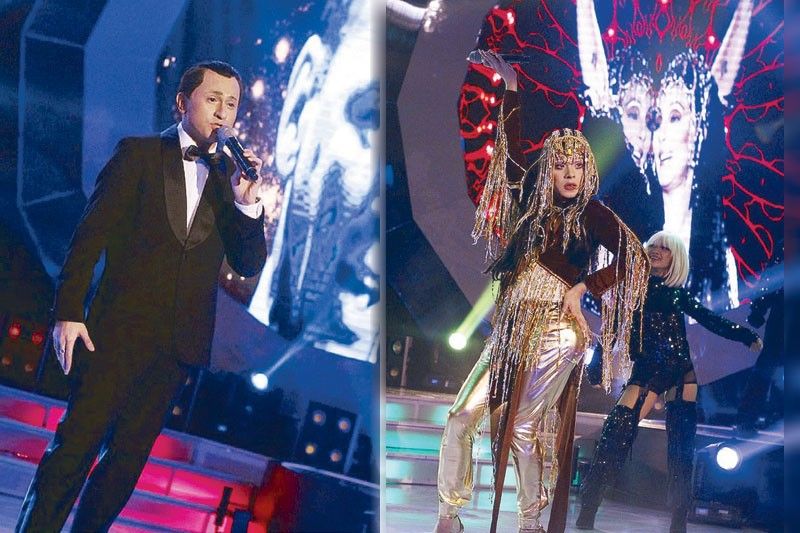 In March 2015, ABS-CBN started the first season of the singing and impersonation competition, Your Face Sounds Familiar, then hosted by Billy Crawford. After two seasons with adult celebrity contestants and another two seasons with the kids, the show returned on weekend primetime, this time hosted by Luis Manzano.

Megastar Sharon Cuneta, Ogie Alcasid and Gary Valenciano return to take on their roles as judges, while Jed Madela and Nyoy Volante serve as vocal mentors for the contestants. Meanwhile, Darren Espanto and AC Bonifacio host the online edition of the show.

For the first and second weeks of Your Face Sounds Familiar, Jhong Hilario slayed the competition when he brought home two consecutive wins, first as Apl de Ap, when he rendered Bebot in the pilot episode and next as Bamboo, when he crooned Tatsulok.

In his third week, however, Jhong as “The Sample King,” was not fortunate enough to do a three-week winning streak. As Enrique Iglesias, he merely landed in the fifth spot with his not-so-successful transformation and performance of Bailamos.

Former Goin’ Bulilit star CJ Navato proves The New Breed Crooner, the other side of him most people have not witnessed yet. He impressed the audience when he impersonated the likes of Jose Mari Chan singing Beautiful Girl, Frank Sinatra with Fly Me To the Moon and even Rico J. Puno with Macho Gwapito.

Erstwhile Pinoy Big Brother teen housemate Vivoree Esclito was visibly on tenterhooks when she first took on Sarah Geronimo and sang Tala, then later as Geneva Cruz, who was just in front of her and Vivoree rendered Geneva’s signature hit, Kailan.

However, when Vivoree, known as The Rising Sweetheart in the competition, sparked as Camilla Cabello with Havana, she wowed the judges and climbed up to second place in the weekly ranking.

Lie Reposposa, as most everyone knows, was a product of It’s Showtime’s Tawag ng Tanghalan portion and she eventually landed a slot as one of the housemates in Pinoy Big Brother Otso. She proved the Pinoy Big Belter tag accorded to her when she belted out Whitney Houston’s I Wanna Dance With Somebody, while she captured everyone’s hearts as Moira de la Torre with Titibo-Tibo.

Only in her third week in Your Face Sounds Familiar, the talent from Davao del Norte got her first challenging, gender-bending assignment to impersonate the late April Boy Regino and rendered Umiiyak ang Puso.

Geneva Cruz of Smokey Mountain fame marks her return to the local entertainment scene with her Your Face Sounds Familiar venture. In her pilot performance, the Pop Royalty gamely grooved to Beyoncé’s Crazy In Love, then followed it up with the trademark Pilita Corrales performance of Kapantay ay Langit and a sweet take on her cousin Sheryl Cruz’s Mr. Dreamboy.

Singer-actor Christian Bables displayed the performer in him by doing one challenging transformation after another. He was the sexy Adam Levine of the popular Maroon 5 with Sugar, then immediately went with a female impersonation of Cher’s Strong Enough and Justin Timberlake’s Sexy Back.

The IDolls Trio of Lucas Garcia, Matty Juniosa and Enzo Almario continues to enthrall Your Face Sounds Familiar audiences with their performances week after week, especially when they took on Hagibis in the pilot episode, followed by Dreamgirls with the powerful One Night Only and Earth, Wind and Fire’s iconic September.

On the second week, Luis was given his baptism of fire as the new host of the singing competition when he impersonated rapper Andrew E. with Andrew Ford Medina. Luis proved he could rap, a talent that should remain “hidden,” laughed Sharon.

The transformations of the artists were commendable every week. Undoubtedly, they go the extra mile to deliver a marked, if not memorable performance. They also make a conscious effort to eclipse what they did the previous week to elicit a high ranking and a good score.