There’s a lesson to be learned from the experience of Anthony “Ka Tunying” Taberna who lived in the squatters’ area during his early years in the city (from San Antonio, Nueva Ecija, where he was born).

“Those were years of struggle,” said Anthony.

For a while, he and his two sisters lived with an uncle.

“It was hard. Para kang tumutulay sa alambre. If you forgot to wash the dishes, medyo pagdadabugan ka na.”

That started his quest for a place of his own.

Anthony turned sentimental after he recently signed up as endorser of P.A. Alvarez Properties & Development Corporation

Alvarez’s vision is to provide affordable housing to Filipinos. “It was my father’s dream,” he added. 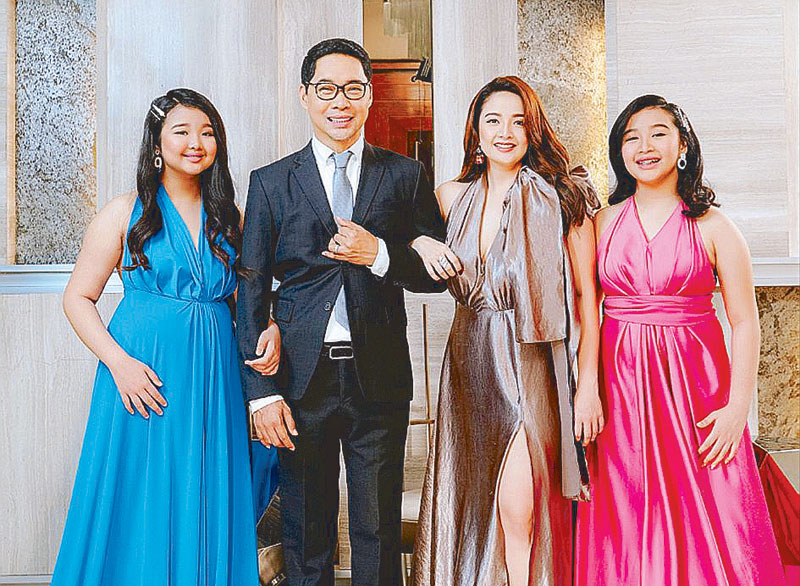 Anthony and his wife Rossel Velasco-Taberna at their well-appointed home in Quezon City, with their daughters Zoey and Helga

P.A. Properties has developed 40 communities and constructed more than 20,000 housing units from its inception 26 years ago, and continues to open projects in Laguna, Batangas, Cavite, Bulacan, Pampanga and Metro Manila, determined to build 12 million units by 2030 (per data provided by Subdivision and Housing Developers Association, Inc./SHDAI).

“It’s the perfect endorsement for me,” Anthony pointed out, “kasi having a house of my own was my dream from the very start.”

The fourth among seven children, Anthony was born on Jan. 16, 1975, same as his father’s birthday and the date of the town’s fiesta. His father was a bus driver who died in 2002. “I was able to buy him a passenger jeepney. When he died, I asked my mom if I could use his name Tunying. I am his junior; he was the original Antonio Taberna.”

A devout INC (Iglesia Ni Cristo) member, Anthony was a Mass Communications scholar at New Era College. To earn his keep, for five years starting in 1992, he worked at the radio station dzEC of Eagle Broadcasting Corp. (EBC) as translator of English editorials to Filipino.

“My dream was to be a minister but fate had another mission for me.”

He embarked on the long and winding road to his own home.

After five years at his uncle’s house, Anthony and his sisters moved to the squatters’ area near the market on Commonwealth Avenue.

“We rented a one-room space. Nandoon na lahat. May banyo pero walang tubig. We were on the second floor and the water pressure was weak, so I had to fetch water. I was already doing the graveyard shift (9 p.m. to 5 a.m.) as a radio field reporter at ABS-CBN. We were six in that small room…my two sisters, two cousins, one uncle and me. I would sleep on a couch in the kitchen.”

After two years, they again moved as bedspacers in Bago Bantay (on Cavite Street) still in Quezon City. The three other rooms were rented by other people. They all shared the common bathroom. “That was in 2001. I was covering Malacañang at that time. There was no exhaust in our place so whatever our ulam in the morning was, dumidikit ang amoy sa shirt ko. My friends would tease me, ‘Alam namin ang ulam n’yo kanina…tuyo!’ In 2002, we moved to an apartment with two rooms in San Francisco del Monte, this time may sariling bathroom at toilet na. In 2007, with my savings I bought an old house in Bagbag, Novaliches, Quezon City, which was beside the Bagbag Cemetery. Mura ang bili ko. I was joking to my family, sabi ko, ‘When I die, I will just walk to the cemetery.’ It was just 30 meters away.”

That old house holds a sentimental value to Anthony. When he married Rossel Velasco (a former broadcast announcer and StarStruck member), he fulfilled his promise to immediately bring his brand-new wife to his own house.

They lived in Bagbag for twelve years (the house has been converted into bodega for the couple’s chain of restaurants) and moved to an exclusive village in Quezon City, with no less than Julius Babao and Tintin Bersola, and Gerald Anderson as neighbors.

As an INC member, Anthony is not supposed to endorse certain products (cigarette, gambling, hard drinks, etc.). “I turned down an offer to endorse an alak. The talent fee was good but I wasn’t tempted.”

“Why not?” said Anthony. “It’s for family planning.”

Since Aug. 31, 2020, Anthony and his partner Gerry Baja have moved (from ABS-CBN) to dzRH on the 5 to 6:30 p.m. timeslot, Monday thru Friday. They spice up their program with not just news and commentaries but also entertainment tidbits, jokes and viral videos. Anthony is also on social media, with over one million followers on his Facebook page, 259,000 on Instagram and 100,000 (silver button) on YouTube.