The show must go on: Pacquiao welcomes Ugas as new foe 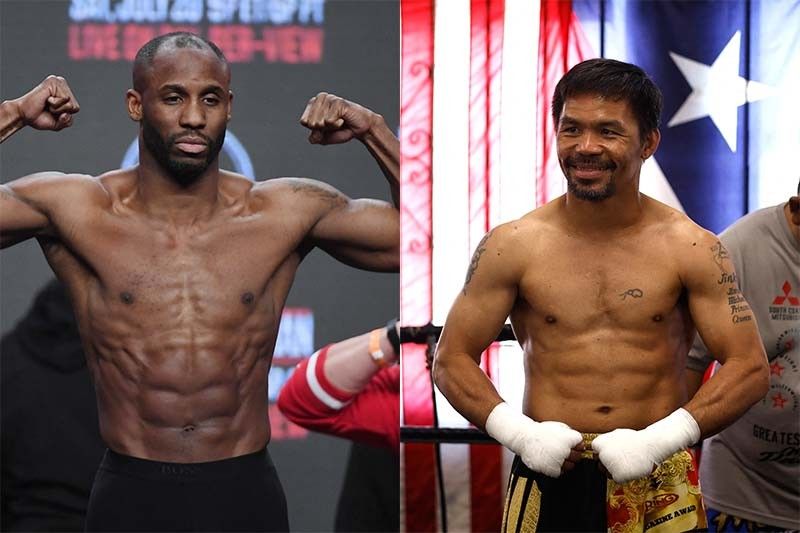 HOLLYWOOD – A surprise twist rocked Manny Pacquiao’s scheduled ring return next week as Errol Spence Jr. went down with an eye injury and has been ruled out for what’s supposed to be one of the biggest boxing fights this year.

Spence, who was originally scheduled to put his WBC and IBF welterweight titles on the line against Pacquiao on August 21 in Las Vegas (August 22, Manila time), had been diagnosed with a torn retina that suddenly put him out of commission.

Related Stories
Spence out of Pacquiao fight with eye injury, Ugas to step in
Who is latest Pacquiao foe Yordenis Ugas?

Instead, Pacquiao will now face Cuba’s Yordenis Ugas (26-4, 12 KOs), the reigning WBA “super” welterweight champion — a title that once belonged to Pacquiao himself.

Speaking from his training base here in Los Angeles on Tuesday (Wednesday, Manila time), the Filipino icon welcomed Ugas as a last-minute replacement to Spence.

“Ensayado naman si Ugas (Ugas has been training),” Pacquiao said of his new opponent, who was supposed to take on Fabian Maidana in the undercard of the event set at the T-Mobile Arena in Las Vegas.

Ugas being bumped to the main event should not diminish things, with Pacquiao stressing that they can finally settle in the ring a previous issue involving both of them.

“It will still be a title fight,” Pacquiao added.

It can be recalled that Ugas, previously the holder of the “regular” WBA 147-pound belt, had been promoted to “super” status after the WBA stripped Pacquiao of the said distinction due to inactivity.

Pacquiao is now using the chance to take the title back as his new motivation.

“He has the belt that was given to him even if we didn’t fight each other,” the fighting senator continued.

Perhaps most importantly, Ugas stepping in for Spence turned out to be the most ideal outcome — for the opposite would be disastrous for Pacquiao, who is itching to step back into the ring after a two-year hiatus and had been hard at work for the past few weeks.

“It’s a good thing that the fight was not cancelled. Good thing the fight will go on because hindi masasayang yung pinaghirapan sa training camp,” the eight-division world champion said.

“This is still a championship fight. We can’t afford to lose focus,” said Pacquiao.