The two London, Ont., nurses say their gruelling year has been made better because they met each other while working on the front lines of the COVID-19 pandemic at one of the city’s assessment centres.

“If it wasn’t for the COVID assessment centre, we never would have gotten to know each other. We started casually talking, and then one day, we were working the swabbing station together, and we had so much in common, and we became very close,” Richards said.

“Neither of us work there anymore but we keep in touch every single day.”

Both women grew up with only brothers and say their friendship is a match made by the universe.

“We’re both into yoga and energy and the universe. We both love to travel, we’re planning a trip when we can do that again,” Richards said.

The two nurses both volunteered to work at the assessment centre at the beginning of the pandemic when things were much more uncertain, and the threat of bringing the virus home to their families was always on their minds.

“As a nurse, it’s in your blood to care and want to help out. I’ve never experienced anything like this in my professional career,” Nernberg said. “I’ve travelled, I worked in the States and Australia and Canada and I couldn’t sit back and watch this happen. I volunteered to work at the assessment centre, that’s where I was needed and that’s where I could make a difference.” 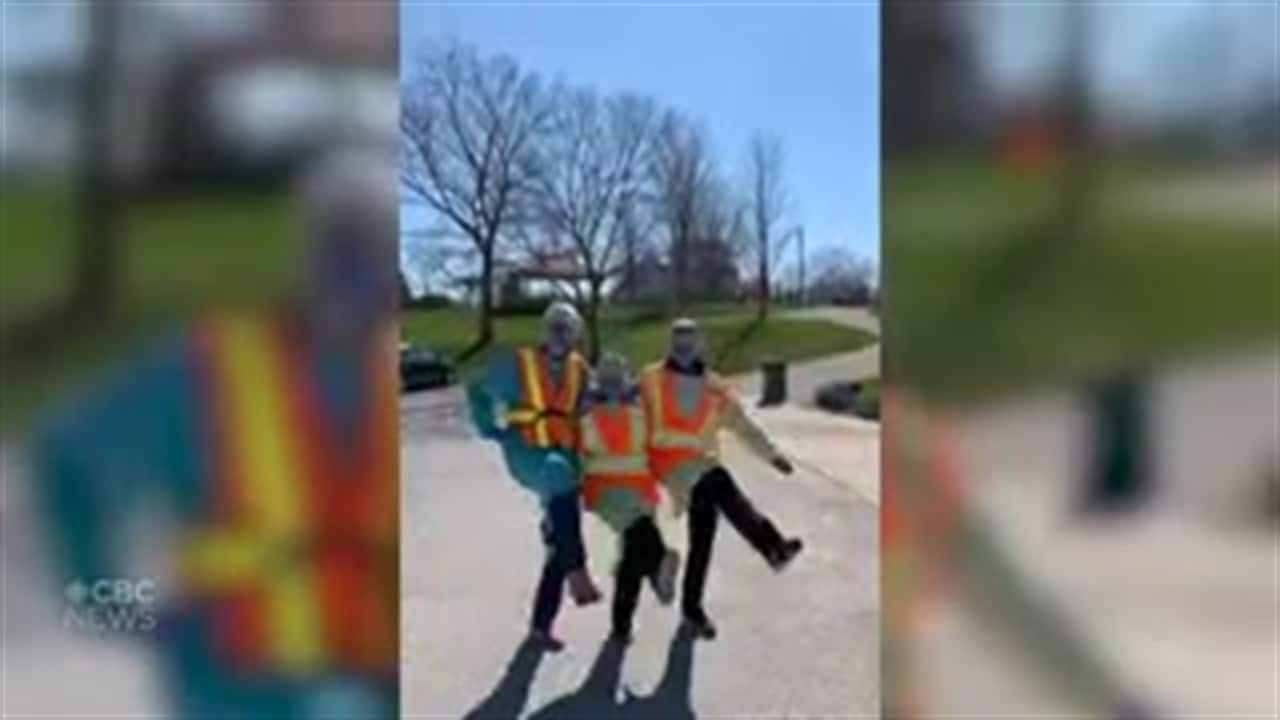 These London nurses formed a special friendship during the pandemic

Nurses Jenny Nernberg and Alanda-Joy Richards flank a co-worker outside a COVID-19 assessmentre in London, Ont., while dancing the cancan. They became close friends while working together during the pandemic.0:12

The staff at the centres rotated through various jobs, from signing people in outside to greeting them at the door and, finally, using a swab to gather a sample that can be tested for COVID-19.

“The swabbing station was definitely where patients were the most nervous,” Nernberg said.

It was there that the two women hit it off, realizing that their nursing style was very similar, and so was their outlook on life. Nernberg has a young son and Richards a step-son, so the two have gotten together for socially-distanced hikes.

“We have very similar nursing practices and so we bonded over that, and then we realized that our lives outside of our nursing careers were very similar as well,” Nernberg said. “She’s just a very happy, positive, kind, generous person.”

Both said their friendship and the team atmosphere at the assessment centre were blessings.

“I don’t think we would have gotten through some of those really, really dark days if it wasn’t for such an amazing group there, and the laughter and humour,” Richards said.

“There’s just so many fun times that we had together and I think that’s the only thing that really got us through those days. I’m so thankful for that because it made the first five months of the pandemic so much easier.”

Share
Previous ‘From the bottoms of our hearts’: Bunibonibee Cree Nation thankful to caregivers of elders with COVID-19
Next Santa flies in by bucket to see kids in Fredericton hospital