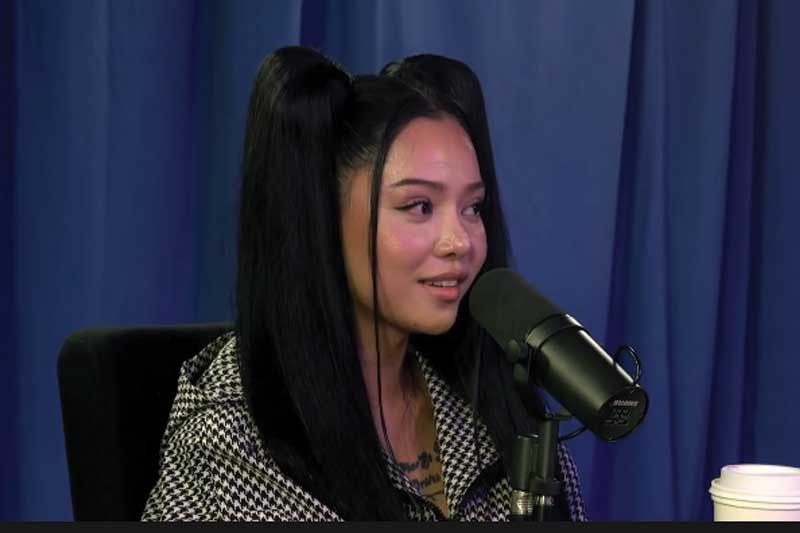 The tattooed petite beauty who rarely speaks unless lip-syncing on her videos opened up about her traumatic childhood experience while growing up on a farm in the Philippines.

The sensational Filipina TikToker, who has 73.7 million followers and combined 1.6 billion likes on the app, sat with H3 Podcast hosts Ethan and Hila Klein in an almost two-hour interview uploaded on June 18 on YouTube.

The interview detailed her growing up years about being bullied at home and in school in the Philippines, how she ended up in the United States and joined the US Navy, and how she started on TikTok.

Everything's good until the farm…

Bella shared that she used to live with her grandmother in the slums until she got adopted when she was three years old.

Her adoptive parents' treatment was normal until she turned seven when her stepdad, a retired American serviceman, bought land and built a farm. He married a Filipina he met while stationed in Saudi Arabia. They then decided to settle in the Philippines.

"Actually, the abuse didn't start when they adopted me. It was good up until I was six. When I was seven, that's when it started when we got all the animals in the farm. But before that, my life was normal. I was given good treatment like we would go to the mall and spend time like a family. But I don't know everything started changing when we got like farm animals, once we started planting trees," she recalled.

Bella didn't share in the interview where she grew up in but in a separate video YouTube and MTV star, Filipino-American Bretman Rock, uploaded in the latter's channel where they were doing a tie-dying challenge, Bretman shared that Bella and him were actually cousins. He said they were from Pangasinan.

Bella, who also opened her YouTube channel in May and already has more than three million subscribers, shared that she had to wake up early and to tend to the animals in their farm, which had a house that had seven rooms.

"It was very hard actually because I had to wake up at 4 a.m. Sometimes, I have to wake up at 3 a.m. if I want to get to school on time because in the Philippines, school starts at 6:30 a.m. So I have to be able to finish all the chores. I'd be sweeping the yard, like picking up dog shit, cleaning the cat house, sweeping goat poop.

"And I have to clean up real good because my stepdad would be mad at me. He'll be like, 'Oh you're not eating breakfast if you don't get this done'," Bella shared.

Ethan remarked that her adoptive dad's action was "bordering on abusive."

Bella agreed and said she didn't realize that it was until she got to the United States when she was 14 because to her it was "normal."

Apart from child labor, she was also slapped by her stepdad.

She and her brother were also not allowed to sit on the couch and she even had to ask permission to drink a glass of water. They were also forbidden to take a shower after cleaning the farm.

Bella said this is also among the reasons why she got bullied in school because she would smell of animal poop. She also got bullied because of her natural curly hair.

Even then, she still wanted to go to school. At school, she thrived and took home 36 medals for the various art and singing competitions she joined. Still, her parents didn't know because she kept those a secret.

"School was my escape even if I was getting bullied. I didn't give a… because I'd rather be bullied, be in the school than go through (something bad) at home," Bella said.

Bella tried to reach out to anyone who would listen to her cry for help. There was one time when she went to school with a swollen, bleeding right hand. Her teacher did not even bother to ask how she got the injury but instead asked her to hurry up with her writing even though she was struggling with it with her left hand.

Although she doesn't blame her adoptive mother, Bella said she felt that her mother could have said something about the abuse.

"She wasn't really mean to me growing up but she did call me 'stupidbitch' as a nickname and she didn't do anything to protect me. It's also embarrassing because I would be outside and they would just call me (that nickname)," she recalled.

Ethan prodded if it was in English and Bella said it was since they were not allowed to speak the "native language" at home because of her American adoptive father. Her brother was also called with different names, particularly the "f" word which was a gay slur. Her two older siblings, however, were not called names.

Even when they went to migrate to the US when she was 14, she still went through traumatic episodes living with her adoptive parents. She and her brother were the only ones eligible to migrate with them after her adoptive dad was advised not to go back to the Philippines following a bypass surgery.

To the Navy: Road to freedom

In the US, the abuse would continue, with her neighbors hearing her adoptive father yelling at her.

Bella said she became emotional after a neighbor in Texas approached her while she was throwing the trash. The neighbor said Bella can just approach her if something happens.

Her opportunity came when she enlisted in the Navy after her brother did. Her father was aware of her decision and it was okay with him.

"At first, I was scared but it was my only way out and I have to do it," she shared.

Her adoptive father's nonchalance was reinforced when Bella shared his last words to her when she was picked up by her recruiter on the way to the Navy boot camp base.

"Funny because the day I left for bootcamp, ahm, my parents couldn't even drive me to the… The last words from my stepdad was 'Don't ever come back here. This is not your home.' He said, 'If you fail boot camp, you're not coming back here.' He basically said bye," she recalled.

Bella said her adoptive mother did not really say goodbye to her.

"That hurt. That definitely hurt because I was still thinking like maybe he'll change. But now I was just like… I don't care. But back when I was younger, I still had a thought in my mind like maybe they'll change and love me as a daughter," she said.

Bella found her freedom in the Navy. While her batchmates were crying because they would miss their parents for three months, she was giddy because she thought it was her very first sleepover and she would later realize that she didn't need to ask permission whenever she wanted to go out or take a leave.

She also had her very first close friends in the Navy. She was recruited to its musical division where she sang during boot camp graduations.

When the boot camp ended, she immediately signed a four-year contract with the Navy. Part of her job was handling and cleaning weapons, including submachines like GAU-21, which was 90 pounds and a little more bigger than her petite stature.

She had her first date, first kiss, relationships and heartache when she was deployed in the Navy. It was also in the Navy when she had her therapy after the people around her noticed that she rarely talked.

"After four years, I decided to leave because I really didn't have an option. My mental health was getting really bad in the military and so the doctors decided not to renew my contract and advised me to take a break. I was really depressed, my PTSD (post-traumatic stress disorder) was getting worse. I was very suicidal to the point that I always have a roommate to watch over me," she said.

She took a break and settled in Hawaii, where she was last stationed.

At the start of the interview, Bela said that she was at the happiest in her life beginning last year when she decided to remove toxic people from her life.

She didn't specify who those people were at that part of the interview.

Towards the end of the interview, Ethan asked if she received messages from the people who bullied her when she was a child now that she is famous on TikTok.

Bella said some of her classmates who bullied her sent her a message and said they would "throw her a party" when she comes back to the Philippines.

Her parents recently reached out to her, and Bella said that she doesn't respond to their messages. She also shared that her adoptive father was recently diagnosed with PTSD.

"That was his excuse, but I felt like, I don't know. I felt like, I mean, I have PTSD but I don't go around and hurt people or take advantage of people," Bella said.

She finds it "funny" because those who hurt her think she might change her mind. She also said they had apologized and were finding it hard to deal with their past.

"It's very hard for them to accept what happened in the past, like they can't accept it," she said.

"The way they apologized to me was like, 'I'm sorry you feel that way.' That made me feel so angry and I'm like, 'Why would you say something like that?'" Bella said.

The TikTok star, however, still looks forward to going back to the Philippines. She's currently based in Los Angeles, California.

Share
Previous Though more successful in doubles, Eala zeroes in on singles bid
Next Gilas-focused Dwight Ramos brushes off comparisons to European players