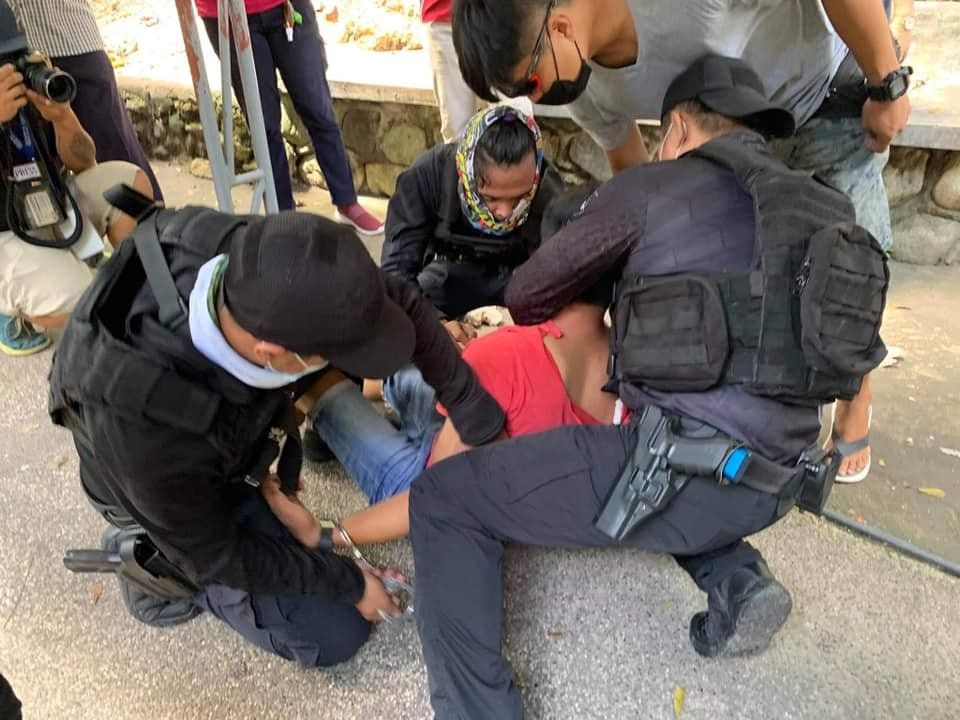 Photo shows personnel of Police Regional Office-7 tackling a member of a Lumad school in Cebu at what they claim is a “rescue operation.”

MANILA, Philippines — It is yet unclear when the remaining six students who were taken by cops and social workers from a Lumad Bakwit school in Cebu can return to their parents.

This is because the students — five girls and a boy, all aged 16 to 17 — are still being assessed by personnel of the Department of Social Welfare and Development, who are still conducting "getting to know" activities weeks after the children were first brought in.

To recall, operatives of the PNP Women and Children Protection Center and social workers under the Cebu City Department of Social Welfare Services went to the retreat house of the University of San Carlos on Monday, February 15, where they took away 19 Lumad minors who were students of a Lumad Bakwit school.

"At present, social workers are conducting a 'getting to know you' activity. That's part of the assessment, so we could determine the appropriate interventions that will serve their best interest," Department of Social Welfare and Development spokesperson Irene Dumlao told Philstar.com.

"We'll know what kind of intervention they need and what they went through after the assessment…getting to know them is not an overnight process," she also said.

Dumlao added that the department is in constant coordination with the children's parents.

The DSWD Regional Office 7 reiterated in an earlier statement that until the appropriate psycho-social interventions are completed, social welfare officers will maintain custody of the six children

Meanwhile, the national police disclosed earlier that the other 13 children have since been returned to their families.

Asked for a working timeline, the DSWD spokesperson said: "It will depend on the assessment. It's a process. We're also assessing the parental capability of the parents."

"The children are in our centers…Their needs are being looked after," Dumlao said in Filipino.

DSWD Standard Operating Procedures say that before the turnover of custody of children under their care, a “proper evaluation and assessment with the child must be undertaken, including the capacity of the parent, and not any other person, to take custody of the child.”

Boy united with other 5 students

The department also disclosed that one boy had been turned over to the DSWD-Region 7 field office on Tuesday after being separated from his classmates.

The boy was separated from the other children from February 21 up until Tuesday, March 2.

Asked if this was due to procedural reasons, Dumlao said: "The LSWDO of Cebu City turned over the girls to DSWD Field Office because it has no available facility for girls. The LSWDO has a facility only for boys. However, the LSWDO finds its facility not conducive for the rescued boy to stay. It referred the boy to DSWD on March 2."

"Psychosocial intervention is necessary to strengthen coping skills or to ensure the social functioning of a person who has undergone a traumatic experience, experienced abuse or exploitation and neglect," though it is unclear why the students needed to cope with trauma in the first place.

"They were turned over to the field office, so it is our responsibility and our mandate to provide for their best interests."

Department says assessing father's capability to be a parent

On Friday, the Save Our Schools Network said that the DSWD-7 refused to release one child despite the demands of their father. "The father of the Lumad minor, SOS Network, and supporting companions have now left the DSWD-7 compound without the child with them," the group said.

DSWD-7 denied the allegation, saying the child and father were "allowed to meet and talk" at the facility but asserting that the father would have to wait for the department's Parenting Capability Assessment Report.

"A peaceful dialogue between the DSWD-7 and the child's father along with a representative from the Save our Schools Network was also conducted," DSWD-7 said in a statement.

Police officers were also deployed at the meeting "to ensure order in the area."

In a statement earlier this week, Police Gen. Debold Sinas, the chief of the Philippine National Police, claimed without offering proof that the parents of one of the girls were communist rebels.

This despite earlier PNP statements that it was the parents who wanted their children "rescued" from the Lumad Bakwit school.

It was Sinas himself who said that the parents sought assistance in rescuing the students from the school, which he claimed indoctrinated the children and put them through "warfare training."

He went as far as claiming that the girl herself, a 17-year-old, was also a communist rebel.

"Both parents of the Subanon girl are reportedly members of the communist New People’s Army in Pitogo, Zamboanga del Sur. PRO7 is also validating reports that the 17-year old Subanon girl is herself a regular communist party member based on information from a former cadre," his statement read.

"Meanwhile, DSWD and PNP-WCPC personnel are assisting five Lumad parents from Lebak, Sultan Kudarat in completing documentation to take custody of their rescued children," he added.

The PNP, which has a history of red-tagging, continues to assert that the operation was a "rescue," though this has been contested by social workers and the University of San Carlos.