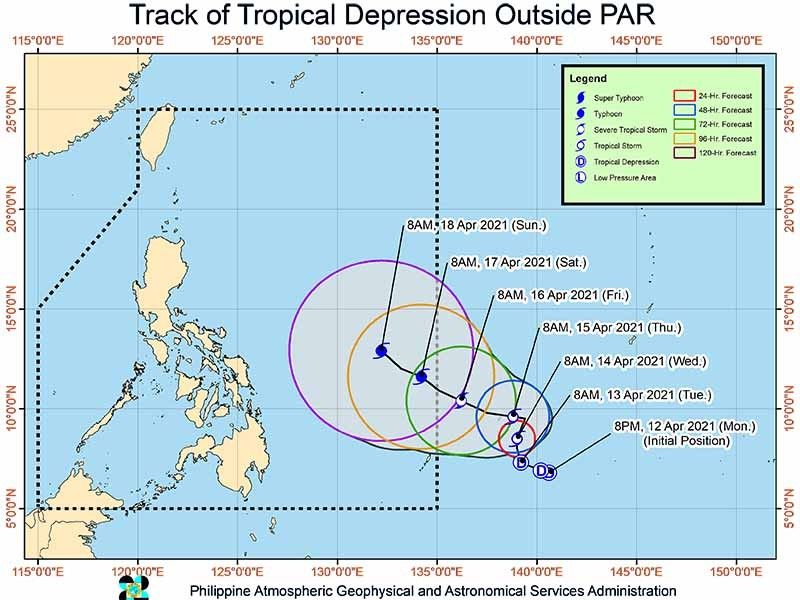 MANILA, Philippines — A tropical depression outside the Philippine Area of Responsibility could intensify into a tropical storm and enter the country’s jurisdiction within the week, state weather forecasters said.

At 3 p.m., the tropical depression was last seen 1,290 kilometers east of Mindanao, packing peak winds of 55 km/hour and gusts of up to 70 km/h.

In an earlier advisory, PAGASA said the tropical depression is expected to head northward or northwestward until Wednesday before it slows down to an “almost stationary status.” Then, it is forecast to accelerate west-northwestward and enter PAR on Friday or Saturday.

Once it is inside PAR, the weather disturbance will be given a local name “Bising.”

The state weather bureau, however, said the potential “Bising” will unlikely affect any portion of the Philippines.

On average, the Philippines gets around 20 tropical cyclones each year.

Last month, PAGASA officially declared the start of the dry season in the country.

2021-04-12
mark
Share
Previous 40 Years of futsal in the Philippines
Next ‘An ugly stain for years to come’: Laurentian University interests reeling from staff, program cuts