Trucks waiting to get in and out of Britain were backed up for kilometres and people were stranded at airports Monday as many countries imposed stringent travel restrictions over concerns about a new strain of the coronavirus that is spreading in southeast England.

Countries across the world have halted air travel to the U.K. while France has banned trucks from entering for a period of 48 hours while the new variant is assessed. There were rising hopes Monday, however, that France would allow traffic to flow again, with truck drivers having to take rapid coronavirus tests on arrival.

“We had a very good call, and we both understand each other’s positions and want to resolve these problems as fast as possible,” Johnson said at a news conference. 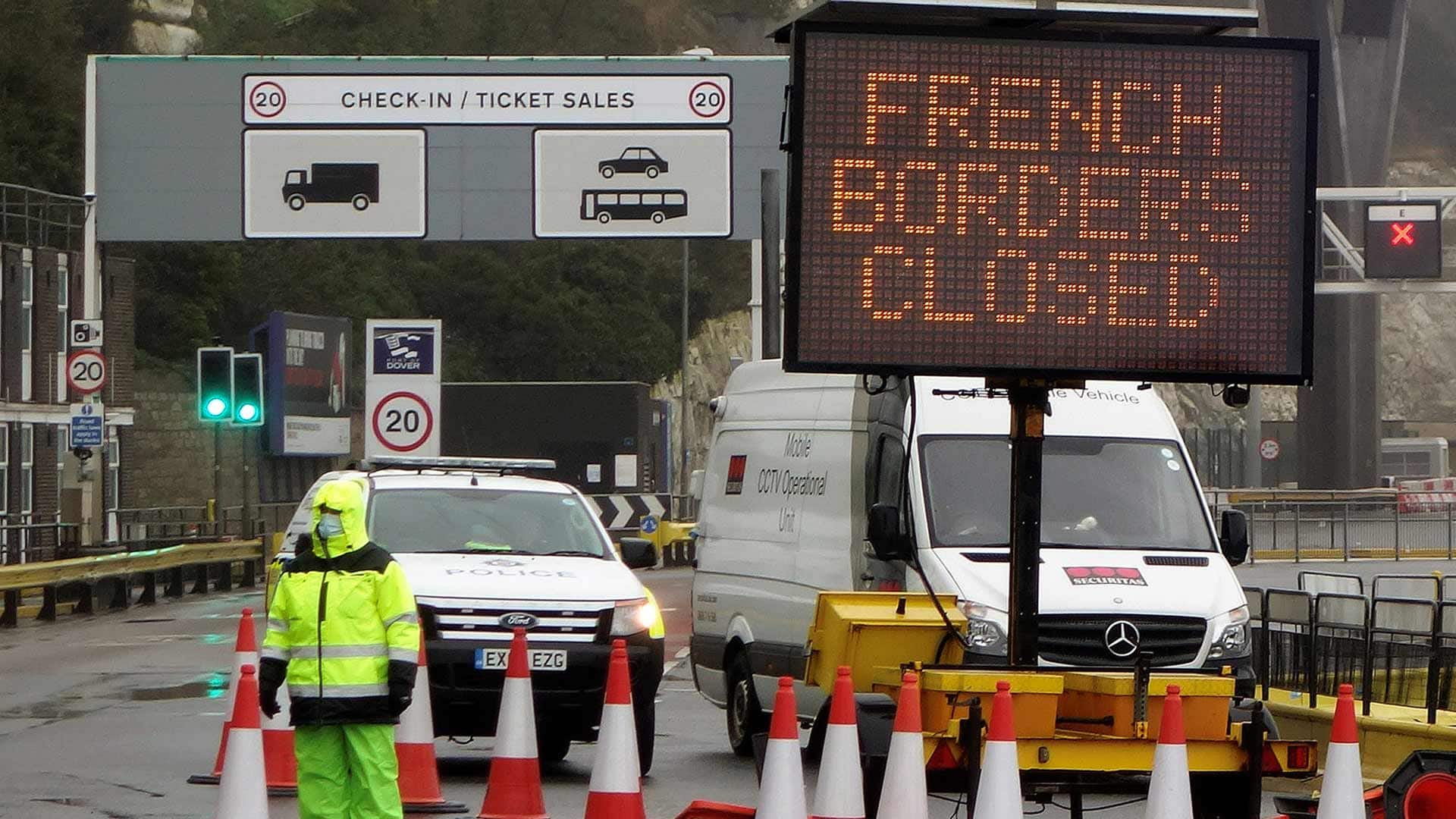 Hundreds of vehicles are stranded at the U.K.’s Port of Dover after France blocked traffic over concerns a new coronavirus that a variant spreading in England could make inroads in France too. That’s sparking fears of food shortages in the days to come, as many of those trucks usually return to the U.K. carrying produce.1:43

Most of the perishable goods coming into Britain from France arrive in trucks. Goods carried by containers on ships, such as manufactured products are not affected by the ban.

Though the French ban does not prevent goods from crossing the English Channel into Britain, the confusion over the new regulations was adding to long backups on both sides at a time when traffic was already being snarled by Christmas-related traffic and uncertainty over Britain’s future trade relationship with the European Union.

Around 10,000 trucks pass through Britain’s Port of Dover every day, accounting for about 20 per cent of the U.K.’s trade in goods. British Transport Secretary Grant Shapps said France’s ban was “slightly surprising” — but tried to calm nerves by noting that the majority of Britain’s trade was not affected.

Shapps insisted that the public won’t notice any shortages “for the most part.”

France’s Minister of Transport Jean-Baptiste Djebbari indicated that a solution was coming. In a tweet, he said that “in the coming hours, at a European level, we will put a solid health protocol in place so that the flow from the United Kingdom can resume.”

A croaky-voiced French President Emmanuel Macron told a cabinet meeting by video Monday: “We are looking at systematic testing upon arrival.” Macron has been working from the Élysée Palace as he recovers from his COVID-19 infection.

Canada, India, Hungary and Switzerland are among the latest countries to halt flights from the U.K., following the lead of many in Europe. France, Germany, Italy, the Netherlands, Belgium, Poland and Ireland were among those who on Sunday announced widespread restrictions on flights from the U.K. Eurotunnel, the rail service that links Britain with mainland Europe, has also suspended services.

Spain will ban all travellers from Britain except Spanish nationals and residents from entering the country from Tuesday amid concerns over the new strain of the coronavirus, the Spanish government said on Monday.

Controls at the border with Gibraltar, where at least one case of the new COVID-19 variant has been detected, will be stepped up, the government added in a statement. It said the entry ban for non-residents had been co-ordinated with neighbouring Portugal, which announced its decision late on Sunday.

In the U.S., the governor of New York state said he wanted a ban on flights from Britain to New York City.

Brett Giroir, the assistant health secretary in the United States, said on Monday that it was possible the U.S. would also ban travel from the U.K. as a new variant of the deadly coronavirus spreads in the country, but added nothing had been decided yet.

“I think everything is possible. We just need to put everything on the table, have an open scientific discussion and make the best recommendation,” Giroir said in an interview on CNN, adding that the White House coronavirus task force will meet later on Monday.

The moves come in the wake of Johnson’s announcement on Saturday that he was placing London and the southeast of England in a new Tier 4 level of restrictions after a warning from its scientific advisers — using what is widely considered to be one of the world’s most sophisticated genome sequencing regimes — that it had detected a new variant of the coronavirus that may be more contagious.

Johnson said early indications are that the new variant of the virus is 70 per cent more transmissible and is driving the rapid spread of new infections in the capital and surrounding areas.

The European Centre for Disease Prevention and Control said Monday that while preliminary analysis in the U.K. suggests the new variant is “significantly more transmissible,” there is no indication that infections are more severe. Experts, however, have stressed that even if the new strain is not more lethal, it’s inevitable that more cases will lead to more hospitalizations and subsequent virus-related deaths.

The Stockholm-based agency said a few cases with the new variant have been reported already by Iceland, Denmark and the Netherlands. It also cited media reports of cases in Belgium and Italy.

Roman Woelfel, head of the Bundeswehr Institute of Microbiology in Munich, said the variants being described by the U.K. have not been seen in patient samples screened in Germany. However, he noted the U.K.’s consortium for sequencing the virus is particularly good at finding new variants.

In Brussels, experts from EU member countries were meeting to discuss the new variant on Monday.

The chaos at the border comes at a time of huge uncertainty for the U.K., less than two weeks before the final stage of Britain’s exit from the EU.

Though the U.K. left the bloc on Jan. 31, it is in a transition period that effectively sees it abide by EU rules until the end of this year. Talks on a post-Brexit trade relationship are still deadlocked and were set to resume on Monday.

Retailers played down fears of food shortages in the short term at least, but warned that there could be problems if the travel bans last for a while and if the U.K. and the EU fail to agree a post-Brexit trade deal.

The British Retail Consortium warned that the closure of France-to-U.K. traffic would create trading “difficulties” in the busy Christmas period.

“Retailers have stocked up on goods ahead of Christmas which should prevent immediate problems,” said Andrew Opie, director of food and sustainability at the British Retail Consortium.

“However, any prolonged closure of the French border would be a problem as the U.K. enters the final weeks before the transition ends.”

Trade association Logistics U.K. has urged people to stay calm and not to rush to supermarkets to stockpile goods.

“Shoppers should not panic buy,” said Kevin Green, its director of marketing and communications. “If freight gets moving again today, then the overall impact on fresh produce arriving to supermarkets should be fairly minimal.”