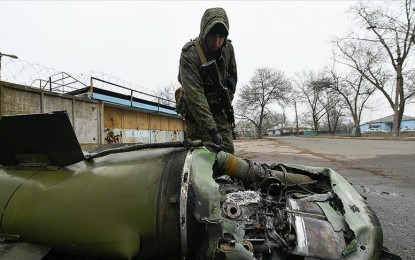 ISTANBUL – Ukraine claimed on Thursday that in the 15-day-old war, Russia has lost over 12,000 soldiers as well as heavy weaponry, including 49 fighter jets, 81 helicopters, and 335 tanks.

In addition, Russian forces have lost 526 vehicles, three boats/cutters, 60 fuel tanks, and seven UAVs at the operational-tactical level in Ukraine in the last 15 days, said the General Staff.

In testimony this week to the US Congress, intelligence officials presented casualty numbers far lower than Ukrainian figures, with an estimated 2,000-4,000 Russian soldiers killed.

Russia’s war on Ukraine, which began on Feb. 24, has drawn international condemnation, led to financial sanctions on Moscow, and spurred an exodus of global companies from Russia.

At least 516 civilians have been killed and 908 others injured in Ukraine so far, according to UN figures, with the real toll feared to be higher.

More than 2.1 million people have fled Ukraine to neighboring countries, according to the UN refugee agency. (Anadolu)