US now included in travel ban against new COVID-19 variant 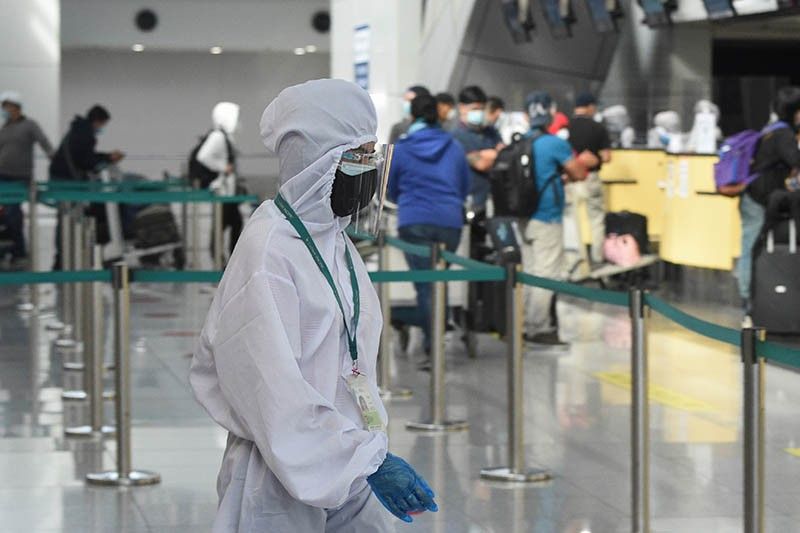 An international airline ground staff wearing protective gear works at the airport in Manila on August 4, 2020.

MANILA, Philippines (Updated 6:01 p.m.) — The United States, which has reported at least one case of the new variant of the coronavirus from the United Kingdom, is now included in the broader travel ban that was announced Tuesday, the Palace said late Wednesday afternoon.

The announcement from the Palace comes after the Department of Health said Wednesday morning that the travel ban would be expanded.

Related Stories
LIVE updates: COVID-19 and extended quarantine in the Philippines
‘No balls dropped’: Duque pushes back at subtweets on vaccine talks
Philippines to ban travel from countries with new COVID-19 variant — Duque

In any case, the travel ban announced Wednesday bars entry for travelers from 19 countries and Hong Kong although Labor Secretary Silvestre Bello III said that Overseas Filipino Workers would also be allowed to come home.

Filipinos will need to undergo a 14-day quarantine upon arrival, regardless of their COVID-19 test results.

The new variant is believed to spread faster, although medical experts over the weekend said that it is not believed to cause more severe cases of COVID-19.

"Yes, we will include them temporarily. Remember that this is not a permanent ban. But that's the policy. Any country that has reported the UK variant will be subjected to a temporary ban," Health Secretary Francisco Duque said at a year-end press conference on Wednesday morning.

"We will wait for the US to officially notify to the WHO (International Health Regulations) or an official announcement by their government regarding this new strain identified in Colorado, before we include in our official list," Health Undersecretary Rosette Vergeire, the department's spokesperson, also said at the media briefing.

READ: After miscommunication, broader travel ban on 20 territories finally sure

Over the past week, the national government's struggle to settle on a broader travel ban drew comparisons to how the Duterte administration resisted calls for a ban on flights from China at the onset of the pandemic in January, citing possibly adverse impacts on diplomatic relations at the time.

Areas already included under the travel ban as announced by presidential spokesperson Harry Roque are:

The final, final decision came hours after Roque initially denied the first announcements from the Manila International Airport Authority and the health and labor departments.

"On December 22, the IATF came together to discuss reports on the COVID variant. That's why they decided to impose a travel ban until December 31. This Monday, the IATF met again [about the broader ban]," Duque also said at the press briefing addressing this delay, though reports of the new strain broke as early as December 20, prompting other countries like Belgium and The Netherlands to announce travel bans of their own.

Duque earlier told President Rodrigo Duterte that a travel ban on other countries would be considered only once community transmission of the new variant has been recorded in that country.

Asked how he would rate the Department of Health's performance throughout the year, Duque said: "From what I see on the ground and in my interactions with the DOH team, I would give them 9-10 in terms of great effort to contribute to the national government's coronavirus response in every aspect of our five-point strategy against COVID-19."

"I salute everyone in the Department of Health, especially the doctors. It's true that there were missteps and mistakes, but those serve as lessons for us to be more successful in the fight against COVID. But this is new, and no other country has done that well against COVID-19. But what we see is their passion," he added.

As of the DOH's latest case tally, a total of 471,526 coronavirus cases have been recorded in the Philippines since the pathogen first emerged in December of last year. It has been 288 days since enhanced community quarantine was first hoisted in some parts of Luzon.

"It is really more [about] increasing, ramping up capacities and ensuring a coronavirus vaccination program," Duque also said of the department's plans moving forward.