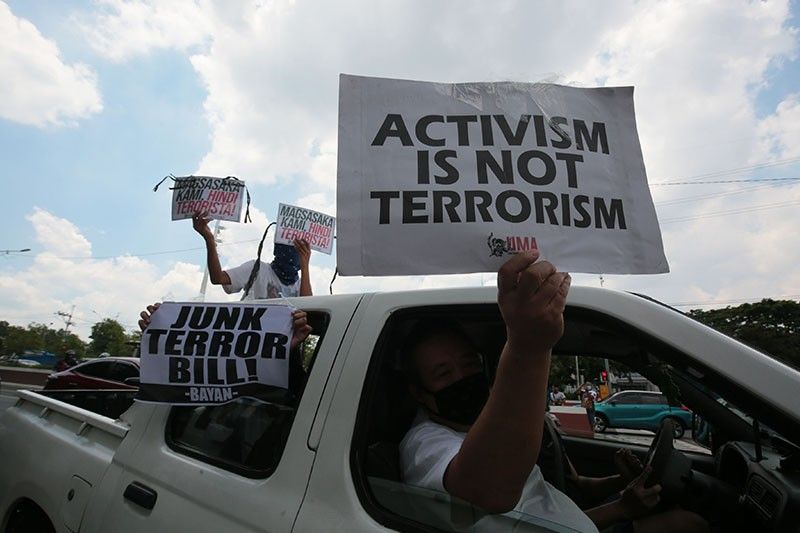 Protesters flash streamers, shout slogan while onboard their vehicles calling to junk the anti-terrorism bill during their picket at Congress last June 3, 2020

MANILA, Philippines — A journalism professor at the University of Santo Tomas on Thursday called a right-wing Facebook page out for red-tagging him through a blind item post.

The Right Thomasian, a Facebook page with over 6,413 likes as of this writing, on Monday threatened to expose a "Bulatlat former EIC and now AB Journalism faculty member" whom it said is a recruiter for communist rebels.

Related Stories
Tagged again for ‘recruiting communists’, UP explains what it actually does
Ramped-up red-tagging a prelude to crackdown under anti-terror law, Casiño warns
Criminalize red-tagging? Lacson says Constitution will be his guide

Replying to a comment on the same post, the page's administrator seemingly confirmed that the person in question was a professor who posted a statement on the shuttering of ABS-CBN earlier this year.

Felipe Salvosa II, coordinator of UST's journalism program and former editor for the Manila Times, in a series of tweets said it was this "hint" dropped in the comments section that made him feel he was being alluded to.

[THREAD] Whoever is running this page is spreading a malicious and unfounded accusation via a seemingly innocuous blind item. The author of the post however dropped a hint in the comments section, which was why I felt alluded to. pic.twitter.com/mDdjn4sFpt

"Whoever is running this page is spreading a malicious and unfounded accusation via a seemingly innocuous blind item," he said on social media.

"First, I was never a part of the staff of Bulatlat.com (I was editor in chief of the Varsitarian, the official student paper of UST, not Bulatlat.com). Second, I did not and will not recruit students for the communist rebellion," Salvosa added.

Bulatlat and other alternative media outlets have been accused of being a front for communist rebels, an allegation that the AlterMidya network has denied.

UP College of Mass Communication professor Danilo Arao on Wednesday called out the post, saying on his Twitter account: "Had the administrators of a red-tagging FB page done [their] homework, they would know that I am the ONLY ONE at @bulatlat who teaches journalism at UP [Diliman] and the [Polytechnic University of the Philippines]."

"To red-tag a UST journalism professor is illogical even if this FB page claims to be pontifical," he added.

As of this writing, the blind item has garnered 286 reactions, 38 comments, and 32 shares on Facebook. Several replies to Salvosa's thread on Twitter urged him to be careful and to stay safe. The practice of red-tagging, or labeling people critical of government as rebels and enemies of the state, puts people at risk, according to human rights groups and the actual killings of people who have been red-tagged.

When ABS-CBN was taken off the air in May, a statement by UST journalism educators posted on Salvosa's Facebook page called the act a "traitorous attack" and a sign that the Duterte administration "will stop at nothing — even amid a national emergency and a crippling lockdown — to crush dissent and stifle a free and independent media."

He clarified on Tuesday that the post "represented the personal and professional positions of the journalism faculty, which was shared by the student body."

"The owners of this page should show evidence that I recruited for the armed rebellion, not hide behind anonymity and blind items. I reserve my right to any legal recourse to protect my reputation," he added.

This comes as the government's red-tagging campaign continues to bleed into multiple sectors, no longer targeting activists exclusively but endangering educators, journalists, lawyers and even doctors as well.

Just last month, no less than President Rodrigo Duterte himself red-tagged the University of the Philippines during a televised address, threatening to defund the school as it does nothing "except recruit communists there anyway."

In response, UP denied the allegations, asserting its "critical role in training the professionals, high-level specialists, scientists and researchers who are needed by the country to generate new knowledge in support of development needs and goals.” It also pointed out that 15 of its graduates form part of Duterte's Cabinet.