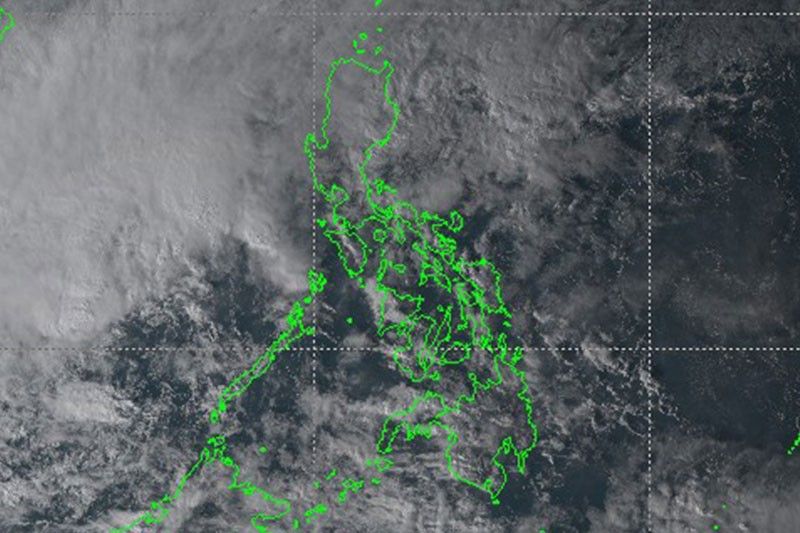 This satellite image shows Tropical Depression Vicky which has since left the Philippine Area of Responsibility by afternoon of December 20, 2020

MANILA, Philippines — Tropical Depression Vicky has left the Philippine Area of Responsibility, affecting over 6,700 individuals and leaving at least P105 million in damage.

State weather bureau PAGASA in its 5 p.m. bulletin said Vicky was last seen at 70 kilometers southeast of Pagasa Island in Palawan outside PAR.

It remains to be carrying 55 kilometers per hour peak winds and gusts of up to 70 kph, moving at the westward direction at a speed of 15 kph.

Kalayaan Islands will continue to experience strong breeze to near gale conditions with Vicky passing through and remains under Tropical Cyclone Wind Signal No. 1.

Moderate to heavy with occasional intense rains are still seen tonight over mainland Cagayan Valley, Apayao, Kalinga, Mountain Province, Ifugao, Aurora, Quezon, Bicol Region, northern portion of Palawan including Calamian Islands, and Kalayaan Islands due to the combined effects of Vicky and the Tail-end of a frontal system.

The said weather condition will prevail on Monday, including over Babuyan Islands and the northern portion of Quezon, while light to moderate with occasional heavy rains will be seen over Batanes, Kalayaan Islands and the rest of CAR.

Metro Manila and the rest of central and southern Luzon will see improved weather by Monday apart from isolated rains and thunderstorms.

Visayas and Mindanao, meanwhile, will see fair weather condition but with chances of isolated rainshowers especially by afternoon.

Vicky is among the last storms to hit the country before 2020 ends, a year that saw 22 typhoons with "Ulysses" being the deadliest at over 100 fatalities and billions in damage.

Initial figures by the NDRRMC on Sunday morning showed 1,590 families or 6,702 persons affected in Region 9 and CARAGA, of which, 5,464 are in evacuation sites.

It has also left P105.4 million worth of damage to infrastructure so far. While the agency has yet to report casualties, Agusan del Sur Gov. Santiago Cane Jr. said at least three were reported dead from the province while another is still missing.

In Cagayan, Gov. Manuel Mamba said water level in the region had breached critical status at 11 meters, with a continuing increase anticipated until Sunday night. Isabela Gov. Rodito Albano, meanwhile, reporte that 10 towns in the province were affected, with some 1,000 rescued.

While Vicky has left PAR, the weather bureau earlier said it is monitoring a new low pressure area off Virac in Catanduanes. This, however, is less likely to develop into a tropical depression in the next 24 hours.

PAGASA has said that one to two more storms may enter the Philippines this 2020, capping off what has been a deadly year due to typhoons amid a pandemic.

Seaboards of the following areas will be affected due to Vicky and the Northeast Monsoon or the Amihan:

Tropical Depression Vicky is the first tropical cyclone to hit the Philippines in December. Bookmark this page for updates.

It is is forecast to intensify into a tropical storm in the next 12 hours as it moves southwestward as it comes under the full influence of the surge of the Northeast Monsoon or Amihan.

Tropical Depression Vicky continues to accelerate as it heads to exit the Philippine Area of Responsibility.

"This tropical depression is forecast to move generally westward or southwestward over the West Philippine Sea in the next 12 hours and is likely to exit the Philippine Area of Responsibility (PAR) this afternoon," PAGASA says.

Signal No. 1 is raised over Kalayaan Islands as Tropical Depression Vicky continues to move west-northwestward. It is forecast to further intensify into a tropical storm within the next 24 hours.

Vicky packs maximum sustained winds of 55 kph and gusts of up to 70 kph. It is moving west northwestward at 25 kph.

Tropical Depression Vicky is moving west-northwest toward the northern-central part of Palawan.

As of 4 p.m. Saturday, the eye of Vicky was situated 135 kilometers east southeast of Puerto Princesa City, Palawan, packing winds of 45 kilometers per hour near the center and gusts of up to 55 kph.

Moving westward at 20 kilometers per hour, Vicky has a maximum sustained winds of 45 kph near the center and gusts of up to 55 kph.

Share
Previous John on being Fr. Suarez
Next Will the Queen meet any of her family outside at Christmas? How royal festive traditions change with the times