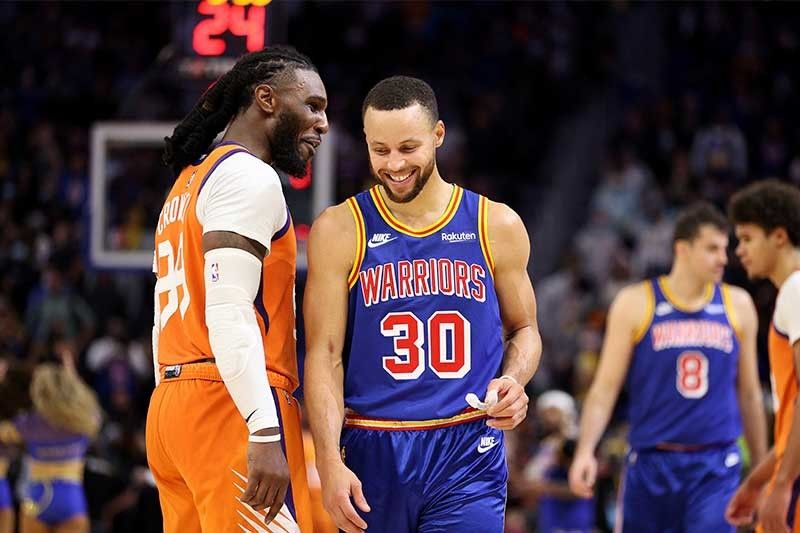 MANILA, Philippines — The Golden State Warriors got back at the Phoenix Suns, 118-96, to put an end to the latter's 18-game win streak at the Chase Center in San Francisco on Friday (Saturday, Manila time).

In a rematch between the Western Conference contenders, Stephen Curry and the Warriors dominated the erstwhile streaking Suns, leading by as big as 27 points in their home turf.

He was joined by four other Golden State players in twin-digit scoring, including 36 combined bench points from Gary Payton II and Juan Toscano-Anderson.

DeAndre Ayton led the Suns in scoring in their first loss in more than a month with 23 markers.

Elsewhere, the Houston Rockets continue their ascent from the cellar after winning their fifth straight game.

Houston edged out the Orlando Magic, 118-116, to improve to 6-16 as ace rookie Jalen Green continues to miss games due to injury.

Christian Wood led the Rockets with a double-double of 20 points and 14 rebounds.

For their part, the LA Clippers squeaked past the Los Angeles Lakers in the battle of LA, 119-115.

Marcus Morris Sr. then followed it up with his own three-pointer to shut the door on LeBron James and the Lakers.

Morris Sr. and Kennard led the Clippers in scoring with 21 and 19 points, respectively.

Paul George flirted with the triple-double of 19 points, nine assists, and eight rebounds.

For his part, Joel Embiid led the Philadelphia 76ers in a come-from-behind win over the Atlanta Hawks, 98-96.

Embiid, who hit the game-winner, finished with 28 points, 12 boards and four assists.

In the other games, the Brooklyn Nets outlasted the Minnesota Timberwolves, 110-105, behind Kevin Durant's 30 points and 10 rebounds.

The New Orleans Pelicans also emerged victorious on Friday (Saturday, Manila) with a 107-91 upset of the Dallas Mavericks.

The Cleveland Cavaliers and the Miami Heat wrapped up Friday's victors with wins over the Washington Wizards and the Indiana Pacers, respectively.