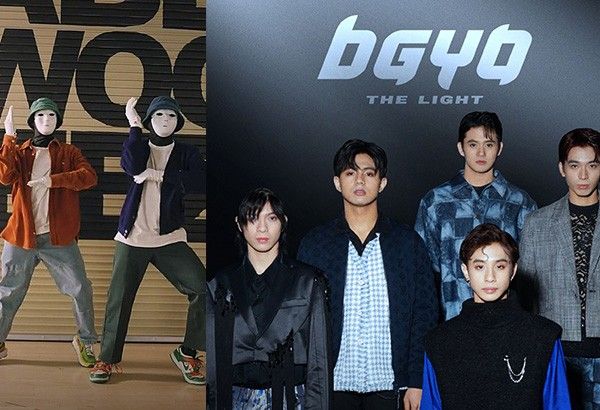 Just a few days ago, BGYO members talked about being inspired by the Jabbawockeez when they were growing up during an exclusive interview with Myx Global.

Four versions of "The Light" including Bahasa, Japanese, Thai and Spanish are included in the debut album of BGYO released on October 7. Its sister group, BINI, is also going to drop its debut album "Born to Win" a week after on October 14. All of these are happening a month before their much-awaited back-to-back concert "One Dream: The BINI & BGYO Concert" on November 6 and 7.

The title track "The Light" is also the album name of BGYO's first album. Other tracks include their comeback single "The Baddest" which debuted at no. 1 at Billboard’s Next Big Sound chart, and the title track "He's Into Her," the soundtrack of the series of the same name starring Donny Pangilinan and Belle Mariano. It also includes upcoming songs "When I'm With You," "Fly Away," "Rocketman," "When I'm With You" and "Kundiman."

At last month's presscon, BGYO has revealed that their concerts will feature the new songs in their album. The November 6 show will feature collaborations on fan-favorite songs, and numbers by surprise guest artists. On November 7, BINI and BGYO will present more live collaborations, sub-unit performances, vocal showcases, and a fan meet. These will be available for streaming on KTX.PH.

Star Magic head and top ABS-CBN honcho Laurenti Dyogi shared that BGYO received a lot of invitations to perform in the country and abroad. They will also be featured in a major music channel. He also took time to thank the groups' predecessors who paved the way for P-Pop to rise.

"I'd like to acknowledge and be thankful sa mga naunang grupo rin naman sa kanila. If not for the other P-pop groups who were ahead of BINI and BGYO, hindi rin naman siguro, how do you say it, mas madali yung pagtanggap sa BGYO. We're grateful to all the groups who came ahead of them from SB19 to MNL48 and to all the other groups even ahead of those two groups," he said.

Share
Previous N.B. woman documents her last days with her dad in series of heartwarming posts
Next Tiger attacks on the rise in India’s coal-rich region