Why lawmakers, rights groups are alarmed at a proposed amendment to the anti-drug law 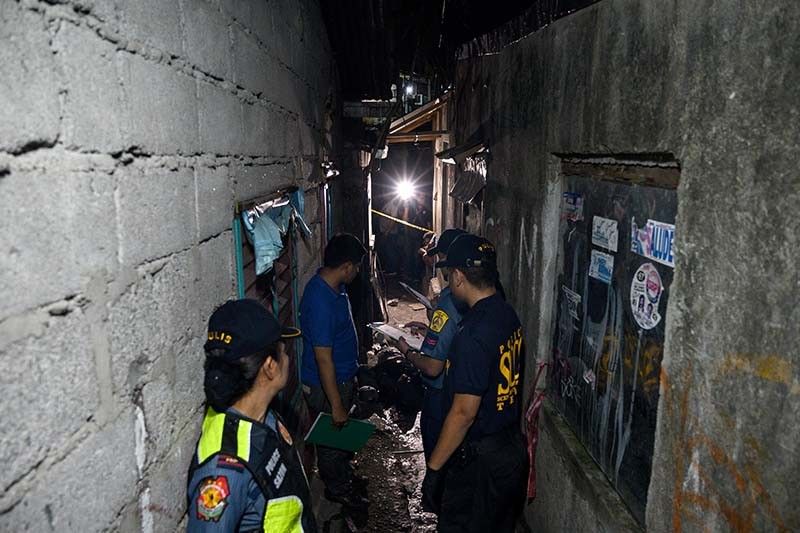 This photo taken on June 27, 2019, shows policemen at the crime scene where the body of a barangay (inner city neighborhood) health worker and former drug surrenderee Michael Oescayno, lies on the ground after unidentified gunmen.

MANILA, Philippines — The administration-allied House of Representatives approved Tuesday evening a bill amending the Comprehensive Dangerous Drugs Act over a provision that critics say removes the presumption of innocence.

While the bill provides safeguards against abuse and provides penalties for erring law enforcers, it also gives them the authority to presume that a person is involved in the illegal drug trade.

"The presumption of innocence is a universal human right," the Commission on Human Rights said in a statement Wednesday.

"The same right is also guarded in the 1987 Philippine Constitution. A proposed piece of legislation, such as House Bill No. 7814, that contravenes this protected right is a cause for serious concern for the Commission on Human Rights and should urge our lawmakers to contemplate its legality and consistency with human rights standards," it also said.

"This is unconstitutional and should be challenged every step of the way from here on out. This turns the constitutional presumption of innocence until proven guilty on its head," Carlos Conde, senior Asia researcher at the New York-based Human Rights Watch, told Philstar.com in an online exchange.

The bill does offer protections against abuse in the conduct of the government's "war on drugs", including:

Should it be enacted, the bill is now expanded to also penalize negligent lessors of any properties found to be actively used as clandestine drug laboratories, among others.

The validity of drug test certificates issued by accredited drug testing centers is also set to be cut to just three months.

But the bill also makes a significant amendment: Allowing more than 20 legal presumptions of guilt on who is considered an importer, financier, and protector or coddler of illegal narcotics.

This means that the law now essentially presumes suspects are guilty until proven innocent without due process.

All those presumed to be guilty of coddling drug smugglers face the penalty of life imprisonment.

With the additions, the following are presumed to be drug suspects or someone with "knowledge of or has wilfully consented to the illegal importation or exportation" of dangerous drugs:

In some instances, any such evidence linking one to drug money is prima facie, or sufficient evidence to proceed to trial or judgment at first sight.

Any equipment that is deemed "suitable for the use, manufacture, or production" of dangerous drugs is also considered prima facie proof that the said property is used to make drugs.

"This is unconstitutional because they run contrary to the constitutional presumption of innocence," Rep. Bong Suntay (Quezon City 4th District) said at the House session on Tuesday night.

"I do not want to send the wrong message to the [Philippine Drug Enforcement Agency], to the police authorities and the prosecution that an accused may now be convicted on mere presumptions."

The CHR stressed the same point: That opposing the proposed amendments does not mean siding with illegal drug syndicates.

"While CHR supports the efforts of the government to eradicate the illegal drug menace in the country, we have been staunch in emphasizing that it must be at all times in accordance with the rule of law and human rights standards," it said, pointing out "irregularities in police operations that resulted in illegal arrests, wrongful convictions, and worst, deaths of innocent individuals in the pursuit of drug offenders."

Rep. Carlos Zarate (Bayan Muna), too, held issue with what he said were "countless provisions that pass the burden of proof onto the accused."

"These added presumptions are alarming at this point in time when the police and the PDEA are firing on each other," he said in Filipino.

Suntay pointed to Section 14 of the country's Bill of Rights, which reads: "No person shall be held to answer for a criminal offense without due process of law." The second paragraph of the section further reads:

In all criminal prosecutions, the accused shall be presumed innocent until the contrary is proved, and shall enjoy the right to be heard by himself and counsel, to be informed of the nature and cause of the accusation against him, to have a speedy, impartial, and public trial, to meet the witnesses face to face, and to have compulsory process to secure the attendance of witnesses and the production of evidence in his behalf. However, after arraignment, trial may proceed notwithstanding the absence of the accused provided that he has been duly notified and his failure to appear is unjustifiable.

"It should not be the responsibility of the accused to prove his innocence. With this, Mr. Speaker, my vote is no," Suntay, who chairs the House panel on Human Rights, also said.

The two were among the 11 negative votes thrown against the landslide 189 affirmative votes and 8 abstentions.

The concerns over the bill come amid the oral arguments over the controversial Anti-Terror Law before the Supreme Court.

The sweeping and far-reaching law allows officers of the law, among other things, to take custody of a suspected terrorist for up to 14 days, extendible for another 10 days, before judicial authorities are informed.

Rights group Amnesty International compared the two measures in a statement Wednesday, with Amnesty Section Director Butch Olano saying: "Like the government’s efforts to address terrorism, the ‘war on drugs’ has persistently evolved into a measure that limits basic procedural guarantees and other legal remedies that serve to protect the innocent, including those who are falsely accused or victims of mistaken identity."

For Cristina Palabay, secretary-general of rights group Karapatan, the added presumptions of guilt can only worsen the existing culture of impunity under the Duterte administration.

"The right to presumption of innocence until proven guilty is a fundamental right under the Universal Declaration on Human Rights and the International Covenant on Civil and Political Rights," she told Philstar.com in an online exchange.

The Philippines ratified the ICCPR in 1986.

Olano shared sentiments with Karapatan, saying the new bill "further encourages arbitrary arrest and detention of drug suspects and will likely facilitate the use of torture and other cruel, inhuman and degrading treatment."

"The lack of judicial supervision that the bill endorses would practically allow security forces to commit further human rights violations with increasing impunity," it added.

Groups say that the spate of instances of police brutality in the Philippines is directly caused by the culture of impunity within the national police organization.

Administration officials continue to assert that there is no such culture, though Duterte continues to encourage cops to "shoot dead" drug suspects, even going so far as promising them protection in the event that they are brought to court.

As a result, police leadership has repeatedly denied or minimized allegations of abuse and misconduct—with one police chief saying there was "no such thing" as extrajudicial killings—while also brushing off what critics say is a culture that allows them to get away with abuse.

Rights groups, including Karapatan and HRW, have also pointed out the PNP's history of incidents of planting evidence. Outside of drug cases, activists, trade unionists and even journalists critical of the administration have been apprehended over the same charge: illegal possession of firearms and explosives. Arrested parties all claim that the charges were trumped-up.

"The proposed amendments…violating this principle is an attempt to directly contravene these core human rights treaties and principles, and promote an even more menacing climate of impunity in the Philippines, where the law is being repeatedly used to foster injustice," Palabay also said.

"In our view, these aren’t safeguards at all, if these violate basic rights."

"The country’s law enforcement problem demonstrates the state’s failure to ensure people’s protection from crimes, whether drug- or terrorism-related. Passing laws that institutionalize disregard for human rights only further inundates a population already exhausted by the impacts of the pandemic," Olano added.

"The existing 'drug war' policy is bad enough as it is — what this proposed law will do is make the situation worse. This opens up new avenues for abuse and more violations of civil liberties and human rights. The members of Congress who pushed this law ought to be ashamed of themselves," Conde said.

The husband of US Vice President Kamala Harris, Douglas Emhoff, will lead the American delegation …