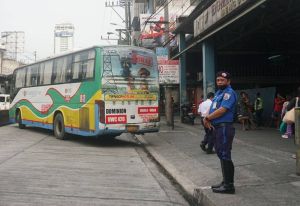 HUNDREDS of commuters were left without rides amid the confusion over the “window hour” bus scheme being implemented by the Metropolitan Manila Development Authority (MMDA).

In a statement Thursday, MMDA Chairman Romando “Don” Artes tried to sort out the mess, saying all provincial buses must end their trips either at the North Luzon Express Terminal in Bocaue, Bulacan, or at the Parañaque Integrated Terminal Exchange in Parañaque City.

Artes said it was the MMDA who requested the Land Transportation Franchising and Regulatory Board to limit the entry of provincial buses into Metro Manila to avoid congestion.

He said provincial bus operators appealed to the MMDA to allow their units to ply EDSA during the so-called window period from 10 p.m. to 5 a.m., a scheme that is being tried out for two weeks starting in the last week of March.

Provincial buses can operate beyond the window as long as they do not end their trips at their own terminals inside the metropolis and instead use the integrated terminals in Parañaque and Bocaue.

Artes said the MMDA and the provincial bus operators had a gentleman's agreement to let provincial buses use their terminals any time of the day during Holy Week until Easter Sunday.

The agreement was extended until Tuesday, and the window scheme resumed last Wednesday.

Many bus travelers who were not aware that the window was once again in effect trooped to bus terminals thinking they could get a ride out of the metropolis. They found out that they had to wait until 10 p.m. when buses from outside Metro Manila are allowed into their terminals.

The Manila Times tried to reach for Artes for an estimate on the number of stranded passengers but he has yet to respond.

On Thursday, a commuter and transport group called on the MMDA to review the window hour scheme, saying it will only worsen the “commutergeddon” of stranded passengers.

In a statement, the Pasada CC party-list cited three reasons asking the MMDA to reconsider the scheme.

First is that there are not enough public utility jeepneys plying their routes because of the high cost of fuel.

Second is what it described as the “forced” implementation of the intermodal terminal in Bocaue.

And third, there are too many commuters suffering because of the scheme.

“We have been saying all along, if we take care of our PUV operators, then we are taking care of our passengers,” the group said.