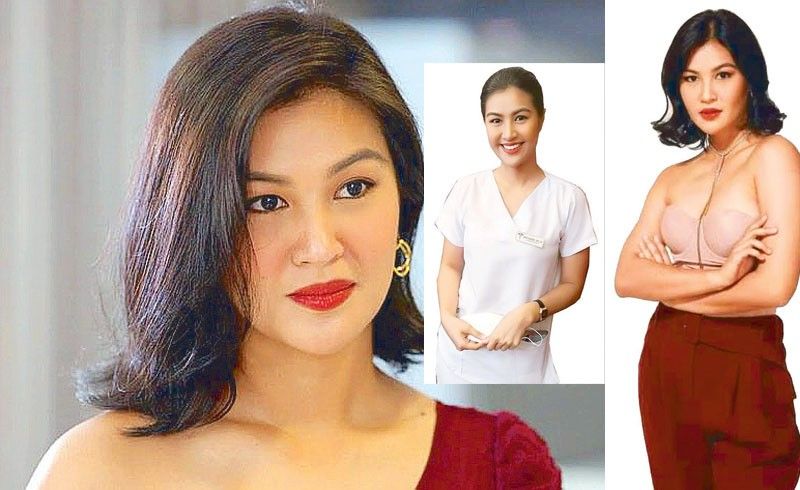 The camera has started to roll for Nelia, the maiden project of A and Q Productions Film, Inc. The location is some place in Gapan, Nueva Ecija. Nelia, as described in the information provided to the media, is “a contemporary movie about a curious woman that will surely intrigue, frighten and make audiences scream.”

Playing the title role is Winwyn Marquez, whose most recent film Time & Again saw her as a writer-waitress named Apol who magically chased love and changed her destiny.

“She’s very unpredictable,” said Winwyn of her latest big-screen dramatis personae in a recent media call. “Audiences will keep on questioning her character,” she added. “Is she a protagonist or an antagonist? Anong meron sa ugali niya? (What’s her personality like?) You wouldn’t understand her (easily).” Thus, being and becoming Nelia is another meaty role that Winwyn excitedly sinks her teeth into. Her nurse character appears to be multi-faceted and intriguing as the story’s privileged, reliable point of view.

“What’s good about it is, audiences will have a rollercoaster of emotions dahil lagi silang mag-que-question (kung) sino ba yung masama dito at sino yung mabait? (as they will constantly ask themselves who are on the bad side or good side),” the actress continued on to reveal the nature of the movie characters. “Ano ba ang nangyayari? May crime ba? May sakit ba? Ano ang nangyayari sa ospital? (What’s going on? Is there a crime? Is there an illness? What’s happening at the hospital?)”

The health institution might also serve as a witness to the narrative actions or the mysterious cases, as Winwyn implied. With that, Nelia borders on the psychological and why not a bit of paranormal.

“It’s very challenging for me,” said Winwyn. “This is the first time that I will do such (hybrid) genre. It seems suspense-thriller with a horror feel. I just hope I’ll give justice to the character.”

Director Lester Dimaranan and his co-screenwriter, also the movie producer, lawyer Melanie “Honey” Quiño, gave the media the background about Nelia, the story and where it might lead to. The movie will explore mental illness as a subject, which banks on the idea that there are Filipinos who experience depression and anxiety.

From the conversations, one could learn that the plot in itself can be considered another character and audiences will get to know Nelia, not only as a person, but also as a woman. The character will test the acting skills of Winwyn since the story is replete with twists. With that, audiences will find themselves on the edge of their seats as they connect the dots or piece the events together and question every character’s motivation to make sense of the ending.

“After (reading) the last page, I (told myself), ‘I want to play the character,’” shared Winwyn. “I wasn’t sure yet if they would tap me for it (at that time). But I never had second thoughts (of accepting it). (I found the character) very exciting, never ko pang nagawa ito.” Thespians like Winwyn will always seize the moment in adding something new to their body of work.

Prior to working on the set of Nelia, Winwyn just wrapped up the two-month lock-in taping of the upcoming GMA Public Affairs’ romance-comedy offering Owe My Love. She gave herself a week break to let go of her character and find time to study Nelia. Like all actors out there, Winwyn knows the importance of approaching her new role with a fresh pair of eyes and being in the moment.