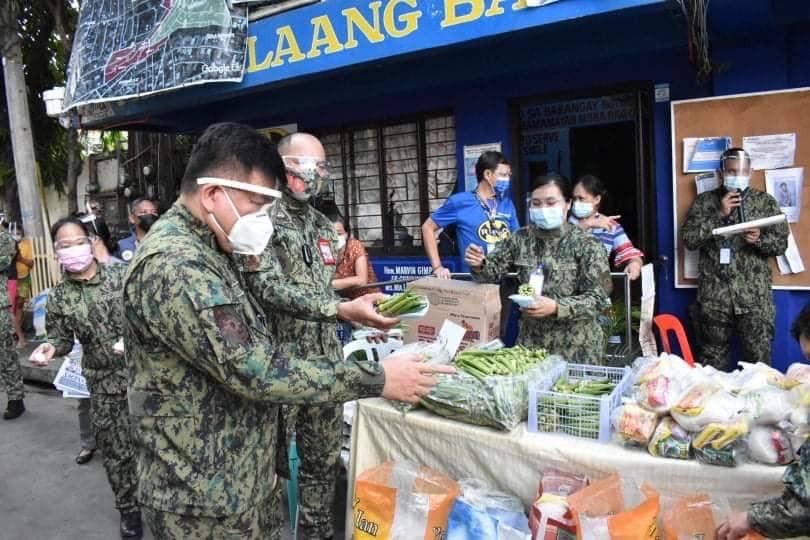 MANILA, Philippines — The Philippine National Police on Tuesday rejected criticisms that its community pantry-like program is for public relations.

The national police this week began rolling out its "PNP Barangayanihan", a police version of community pantries that sociologists and scholars said may distort the original narrative behind the pantries.

In a phone call with Philstar.com, Police Brig. Gen. Ronnie Olay, PNP spokesperson, confirmed that police units around the country have been required to put up "Barangayanihan" initiatives on their own.

"It's not true that this is a PR stunt. When they said 'plant' civilians, that was probably a wrong choice of words. All of our units are tasked to submit after-activity reports, and what's the best way to prove that you conducted the activity? You take photographs," Olay said in mixed Filipino and English.

"Alam naman natin mga kababayan natin, pag nakakuha na ng ayuda, di na 'yan babalik (We know that people just leave and don't come back once they get their aid). So you take a picture before they leave."

Olay added that the PNP has always had feeding programs in communities and was careful to distance the police-led program from the community pantries, saying: "Our police stations have been doing this for years…does anyone own the spirit of Bayanihan?"

But a project brief of the Barangayanihan initiative acquired by Philstar.com said the project was meant to "clearly manifest in respective PCPs that there's a clear partnership between the police and the community," as "respective beneficiaries will take pictures of the activity and post in their respective [Facebook] accounts."

"These netizens can be planted beneficiary civilians so as to manifest community appreciations," it also said.

Police: We involve the barangays

The PNP spokesperson said that the difference between the volunteer-driven pantries and the police-led ones is that the PNP coordinated with barangays and used money from its coffers.

Asked about the timing of the initiatives, which began less than a week after police were documented taking the personal information of some community pantry organizers, Olay said: "That's a very subjective interpretation."

"It's not like we plant them for pictures and take the ayuda back if they don't want their photos taken. The photos probably weren't scripted, it was just a wrong choice of words," he said in Filipino.

"We want this to be inclusive and we want to involve everyone down to our grassroots leaders."