‘You were so great’: ‘Parasite’ director Bong Joon-ho praises Dennis Trillo, ‘On The Job’ gets Venice Film Fest standing ovation

‘You were so great’: ‘Parasite’ director Bong Joon-ho praises Dennis Trillo, ‘On The Job’ gets Venice Film Fest standing ovation 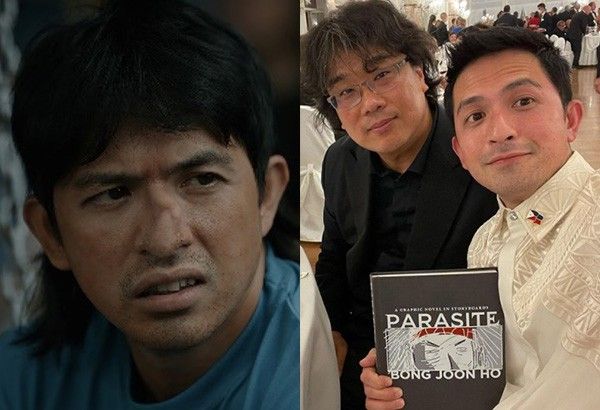 "You were so great," remarked the "Parasite" director in the video posted by the actor on his Instagram.

It was taken right after the five-minute standing ovation the series got at the 78th Venice International Film Festival.

"You were brilliant. You were amazing," praised Erivo.

German director Alexander Nanau remarked "we all loved it" and "you killed it" while "True Detective" star Sarah Gadon was also seen extending her congratulations to Dennis in the video. The video also featured a smiling Quark Henares, head of Globe Studios.

Bong, Gadon, Nanau and Erivo were part of the jury of the festival's main competition. Bong was the festival jury head.

Trillo also posted his signed copy of Bong's hardbound "Parasite" book that features the story of the hit movie in storyboard format. Bong is known to draw his stories in storyboards before shooting his films.

"Labyu tito Bong!" wrote Dennis as a caption of the photo of him and Bong.

Dennis also met and took a group photo with "Eternals" director Chloe Zhao, who was also part of the jury of the main competition.

"OTJ: The Missing 8" is among the competing films at the 78th Venice Film Festival edition. Apart from Venice, it will also be screened in Rome and Milan.

Director Erik Matti remarked at last week's virtual presser on why he cast Dennis in the role and purposely making him look less good-looking than he actually is.

It's the reason why Dennis wears a prosthetic nose, uneven front teeth and sports a mullet in the six-part HBO Asia Original series that is exclusively seen on HBO GO.

The first "OTJ" released in 2013 starred Gerald Anderson as Daniel, the baby-faced prisoner who sidelines as a hitman for hire. The movie also stars another good-looking actor, Piolo Pascual, who played the cop Francis Coronel, Jr.

Both Gerald and Piolo are again in the six-part series as part of the first two episodes with never-before-scenes added.

"So, we came up with idea na basagin ang ilong niya. You know what it does, especially special makeup like that? It even brings out 'yung pagkatotoo ni Dennis sa eksena kasi nga you're not looking at a popular actor. He's such a revelation. Ang endearing niya kahit killer siya. Kawawa. Ang lakas mainlab as a character," explained Matti.