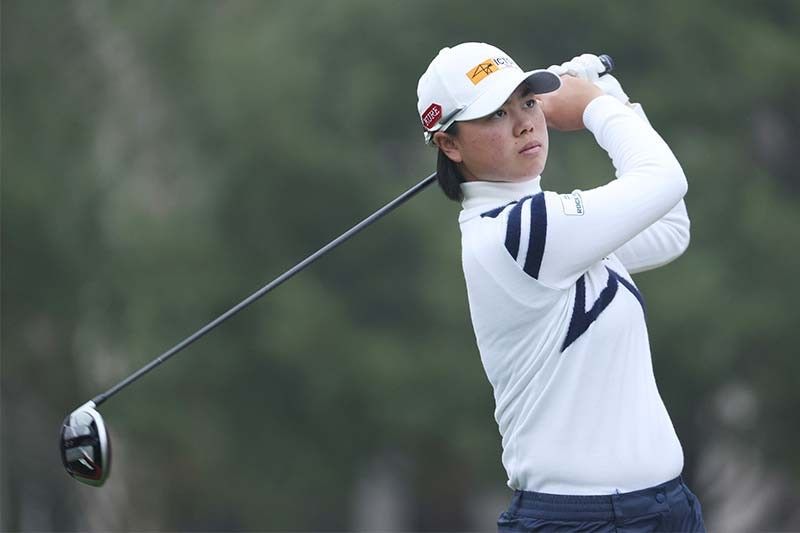 Yuka Saso of the Philippines plays her shot from the sixth tee during the final round of the 75th U.S. Women’s Open Championship at Champions Golf Club Cypress Creek Course on Dec. 13, 2020 in Houston, Texas.
Dante Navarro (Philstar.com) – December 16, 2020 – 1:55pm

MANILA, Philippines — Yuka Saso made a five-spot jump to No. 45 in the world rankings following her joint 13th place finish in the US Women’s Open in Houston Monday even as she bolstered her bid for a sweep of top honors in the Player of the Year derby and money race in the LPGA of Japan Tour.

Saso actually reached No. 48 from No. 55 a couple of weeks back but dropped two rungs last week after finishing tied for sixth in the JLPGA Tour Championship Ricoh Cup. But her gutsy stint in the tough storm-hit US Women’s Open at Cypress Creek netted her 2.47 average points for a total points of 86.45 to post her best world ranking at the close of her rookie campaign.

The 19-year-old Saso’s tied for 13th finish also netted her 112 points as she closed in on Ayaka Furue in their extended duel for the player of year title in the JLPGA. The ICTSI-backed ace improved to 1,258.85 points, threatening Furue, who grabbed the lead (1,371,78 points) at the end of the 14-tournament JLPGA calendar last month.

But the JLPGA said it will still hold more tournaments early next year as part of the 2020 season to make up for a number of cancelled money-rich events due to pandemic.

Furue failed to gain any points after missing the cut in the LPGA Tour’s last major championship for the year about to end.

Saso, with two victories and six other Top 10 finishes, has maintained her lead in the JLPGA money race, amassing Y93,891,170 in earnings against three-leg winner Furue’s Y90,502,992, making the upcoming tournaments something to watch out for.

Barring any major disaster, Saso is also a cinch for one of the two Philippine slots in next year’s Olympic Games. The 2018 Asian Games double gold medalist is at No. 21 with Bianca Pagdanganan likely to make the 60-player roster in Tokyo at No. 41.

Meanwhile, Pagdanganan, whose run of consecutive cuts made in the LPGA ended at eight after failing to advance in the US Open, slipped a rung lower to No. 150 in the world ranking. But the 23-year-old Tour driving leader is all geared up for a big rebound in the Tour’s final event this year – the CME Group Tour Championship. The $3 million event, featuring an elite cast of 72 players, reels off Thursday in Naples, Florida.

“Overall, it’s been a great year for me in terms of golf and being able to play my way into the CME,” said Pagdanganan, whose tied for 28th was the best in her first four tournaments in the world’s premier ladies circuit.

“I didn’t start off that great this year but I played a couple good events and eventually put myself in a good position. Now I’m here and I’m really excited and looking forward to this whole week,” added the 2019 SEA Games double gold medalist, who tied for ninth in her first major, the KPMG Women’s PGA Championship in Pennsylvania last October ,and placed third in the LPGA Drive On Championship in Georgia the following week.