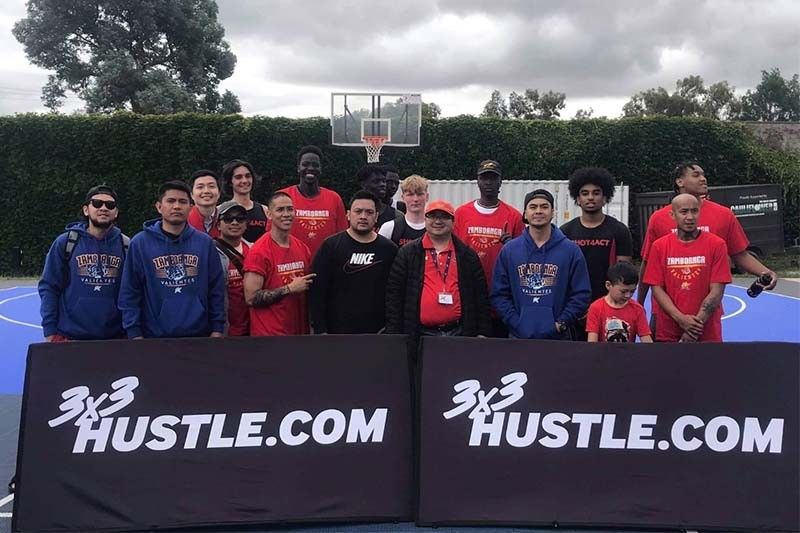 MANILA, Philippines — The Zamboanga Valientes MLV got back at Black Buckets Australia, 14-7, in the final game on Saturday to snare the 3×3 Christmas Street Hustle crown and make history as the first Philippine team to win a basketball tournament in Australia.

It was sweet revenge for the Valientes, who lost to the Black Buckets, 14-16, in overtime in the preliminary phase of the event held at the Belconnen 3×3 outdoor courts in Canberra.

Homegrown veteran Chris Concepcion shone in the final as the former NCRAA mythical team member with the Saint Francis of Assissi Doves shut down the Aussies' top gunner while orchestrating the plays and knocking the points when needed.

Sudanese-Australian Duom Dawan used his 6-foot-10 frame to dominate inside, while former Maharlika Pilipinas Basketball League player Eric Miraflores, who is based in Melbourne, and 18-year-old prospect Adam Compton, who traces his roots in the Philippines also did their part as the Zamboanga Valientes earned the admiration of the local Filipino community, Asian migrants, and even the event organizers.

The Zamboanga Valientes, backed by MLV Group CEO Mike Venezuela and supported by Zamboanga City Mayor Beng Climaco, beat Orange Buckets Australia, 11-8, in the opener and the White Buckets, 15-8, in their second game, before getting waylaid by the Black Buckets in a see-saw and highly physical encounter that ended at 11-11 after regulation play.

The Zamboanguenos also trounced MZ Africa to advance to the semifinals against the Orange Buckets, who they beat anew, 16-11, to earn a rematch with the Black Buckets.

"This is just the beginning of the team's international exposure," said Venezuela, the Valientes' co-owner. "Expect more international competition for our team, our pride the Zamboanga Valientes."

"This accomplishment is just a testimony of the advocacy and vision of the Navarro family. That our Zamboangueno ballers have what it takes to win and perform in the big stage. It is a clear testament of the commitment of the Zamboanga Valientes to always field in Zamboanguenos in any competition," added Venezuela.

"We're doing something good and we'll continue doing it."

According to Navarro, they have been invited to compete in a 3×3 tournament in Las Vegas, Nevada next year and would participate if the vaccine (for the coronavirus) is available by then.

After the final, the Zamboanga Valientes were swamped with congratulatory messages, including one from Tokyo Olympics-bound boxer Eumir Marcial, a Zamboangueno who is set to make his pro debut in Los Angeles on December 16.

Share
Previous Claude Castonguay, father of universal health care in Quebec, dies at 91
Next Controversy-hit ‘The Last of Us 2’ wins big at The Game Awards 2020